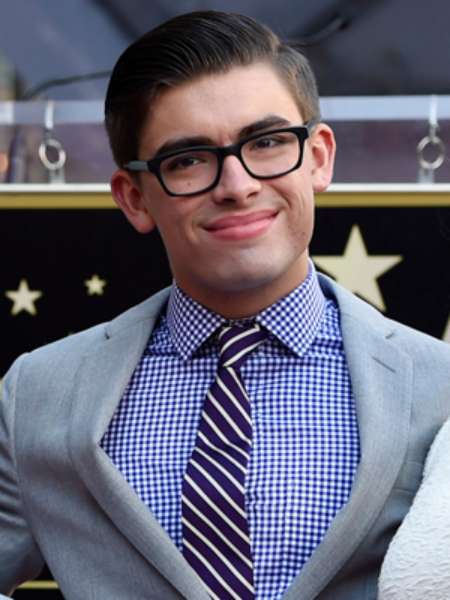 American actor, Michael Joseph Consuelos came to prominence after portraying the role of Mike in the short comedy film, The Bensonhurst Spelling Bee. He is also notable as the production assistant for the television comedy series; The Goldbergs. Recently, he featured as Teen Hiram Lodge in the mystery crime drama series, Riverdale.

Consuelos was born on 2nd June 1997, in the United States. Moreover, he is an American by nationality and belongs to mixed ethnicity (Italian-Irish-Mexican). So, is he dating, or he is single? Let's take a glimpse of Consuelos' personal life.

The 22-year-old, Consuelos is reportedly single as of 2019. Despite born in a show business family, he isn't much expressive about his love life or any other personal details to the media.

Consuelos is working proficiently in the field of entertainment because he aims to become a successful actor like his parents. It seems, currently, he is busy focusing on his career and no hurry to involved in any romantic relationships.

Michael's parents, Mark and Kelly Ripa, are enjoying their happy lovable relationship for decades now. The couple tied the knot on 1st May 1996, in Las Vegas, Nevada and went to Capri, Italy for their honeymoon.

At the time of their wedding ceremony, the bride was dressed in a white gown, and the groom wore a black tuxedo with a black bow tie and a flower on his left pocket. As a matter of fact, both the couple are in their mid-20s' during their marriage as Kelly was 26, and Mark was 25 years old.

The pair are blessed with four beautiful children. After the birth of Michael, they announced that they're going to welcome their second child. Later, Ripa gave birth to an adorable daughter, Lola Grace Consuelos, on 16th June 2001. The couple also shares two sons, Joaquin Antonio and Joaquin Consuelos.

How Did His Parents First Met?

The sweethearts had their first encounter on the set of All My Children, where they portrayed opposite roles in 1995. They later sparked instant chemistry while working together for more than a year.

The couple went to eat a pizza and wine at Consuelos's apartment, where Mark surprisingly proposed her for marriage. During that situation, Ripa asked seriously that you're serious or not? And he said, "I'm serious." After that, Mark introduced Ripa to his mother for the first time to consult about their wedding.

The prominent personality, Consuelos, has a net worth of $500 Thousand as of 2019. He earns subsequent money from his profession. According to Pay Scale, an actor makes a salary of $50,012 in the United States.

Michael acted in an episode, Chapter Thirty-Nine: The Midnight Club of Riverdale, which received 8.5 stars out of 10 by the viewers of the show. Similarly, Lili Reinhart and Camila Mendes appeared on the show.

Michael's parents bought the Upper East Side of Manhattan near New York City, New York, at $27 Million in 2013. Their home features five bedrooms, four and a half bathroom on 6,792 square feet. It also features a private deck with dark-stained oak floors and a playroom with 12-foot ceilings.

Earlier, Consuelos' guardian lived in a $2.34 Million house located in Southampton, New York. Their former home consists of four bedrooms and three and a half bathrooms on 5,572 square feet. They also owned a house in Telluride, Colorado, but later sold out for $2.5 Million.

Rose to Fame as an Actor

Michael Consuelos started his career as an actor where he first played the role of Alien Gremmie in the animated short action series, Duck Dodgers, in 2004. He then starred in the animated adventure comedy series, Go, Diego! Go! from 2006 to 2007.

Take a look at Michael Consuelos' interview with Kelly & Ryan

Consuelos made his debut appearance in the short comedy film, The Bensonhurst Spelling Bee, where he played the role of Mike under the direction of Lauren Palmigiano in 2012. He also guests starred in many TV shows, including Entertainment Tonight, Celebrity Page.