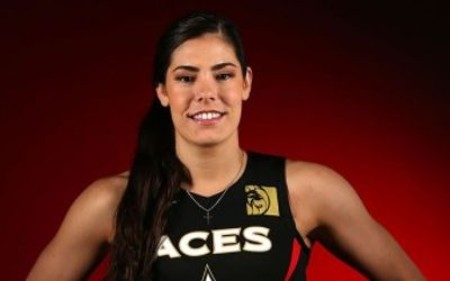 There are many talented sportsperson in the world, but a true athlete only finds true potential after overcoming his own limits and then make the courage to blow the future with his greatness. In the Women's National Basketball Association (WNBA), Kelsey Plum is one of the star players who found her true passion for basketball.

Plum was born as Kelsey Christine Plum on 24th August 1994, in Poway, California, United States. She is the daughter of Jim Plum and Katie Plum, who both are former volleyball players and younger sister to Kaitlyn, Lauren, and Daniel Plum. So, what is going in her personal life, is she dating or single? Let's take a glimpse of Plum's personal life.

The 25-year-old basketball player, Plum is reportedly single and lives a cherish life. Despite being a star player in the basketball, she maintains a low profile and keeps her intimate details close to herself.

Kelsey is currently on the top of her career and focuses on her day-to-day training and matches that make her more sharper and skillful every day. So, this might be the reason why she isn't dating nor getting married until now.

Kelsey's elder sister, Kaitlyn Plum is living the most joyful moments with her husband, Matthew J. Lawrence, who is an accountant and metal worker specialist for a manufacturing company, W.W. Grainger. The couple united as husband and wife on 5th June 2016 at the Holman Ranch located in Carmel Valley, California.

During their nuptial, Kaitlyn wore a beautiful white lace applique ball gown, wearing a beautiful flower crown. Meanwhile, Matthew donned a black slim-fit street smart business suit, tying up with a black tie and a flower on his left pocket.

The pair met for the first time in 2012, and had a short and sweet interaction. After dating for five years, they got engaged on 4th June 2016.

Since then, they share every occasion and vacation with their two lovely children. They recently celebrated their 4th marriage ceremony on 5th June 2019.

American basketball player, Kelsey's net worth is $350 Thousand as of 2019. She is currently in a four-year contract with her basketball team, Las Vegas Aces, from where she receives $57,886 annually salary since 2018.

As a sportsperson, Kelsey is currently endorsing a fashionable footwear brand, Nike. She also promoted many popular brands, including Champs Sports Women, and GNC Live Well.

On the other hand, Kelsey's older sister, Lauren Plum has a net value of $250 Thousand. She makes fruitful earnings from her volleyball career. So, her wage might be similar to an average American volleyball player, which is $43,332.

The Pursuit of Success in the Basketball Court

Kelsey Plum started her career from the 2017 WNBA Draft, where San Antonio Stars drafted her as a shooting guard. During her season with Antonio Stars, she made her great play and named to the WNBA All-Rookie Team. She also recorded 23 points, 6 rebounds, 12 assists with 3 steals.

Check out the interview of Kelsey Plum

Following that year, Kelsey joined Las Vegas Aces in 2018, and in her first game, she recorded four steals at Phoenix on 19th July 2018. Furthermore, she scored 10 points in 14 matches with 20 or more during that time. She is currently playing for two teams, Las Vegas Aces and San Antonio Stars.