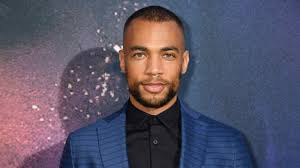 If you guys ever watched The CW supernatural drama series, The Vampire Diaries? Then you surely familiar with the name Kendrick Sampson who portrayed the recurring role of Jesse in 2013. An American actor and activist, Sampson is also famous for his role Caleb Hapstall in season 2 of ABC's drama, How to Get Away with Murder from 2015 to 2016.

Kendrick Smith Sampson was born on March 8, 1988 in Houston, Texas. He is the son of Daphne Smith Sampson and Hoyle Sampson Sr. As per his education, he studied at the Elkins High School where he began performing in theater productions. So far, he holds American citizenship and is of African American ethnicity.

Who is Kendrick Sampson's Girlfriend?

Now Sampson's 5 feet 11 inches tall heartthrob likes to keep his private affairs within himself or under the wraps. There is, therefore, no accurate information as to whether he has a girlfriend or not at the current time.

Even his Instagram account does not give any of the hints of him as a romantic lover of someone. Thus, for now, Sampson is possibly single now and is still an unmarried man.

There was a rumor in August 2017 that Kendrick being a romantic connection with model and actress, Naomi Campbell, now 50 years. In fact, The Vampire actor even wished Normani on her recent 24th birthday on May 23, 2020, through Instagram by posting a photo of two.

He captioned: "Happy Birthday to the 1 & only @naomi." However, the dating rumors have not been confirmed by both parties until now.

In addition, Kendrick failed to abstain himself dating rumors with Fifth Harmony's singer Normani Kordei and Issa Rae. But to date, he never opened up about his prospective partners to the press.

Net Worth and Earnings of Kendrick Sampson

Working in the entertainment industry since 2006, Kendrick Sampson earns a suitable amount of money as a film and TV star. He has a staggering net worth of $1 million as of early June 2020. He has earned his fortune from his acting gigs.

Similarly, Sampson reportedly made the income in the range from $45,000 to $57,000 in a year for playing hits roles in various shows. Added to that, he might have earned about $25,000 for his performance in Vampire Diaries according to his salary.

In addition, the TV star also making an extra amount of money from his own production company called Sampson Studios

Throughout his acting career, Kendrick has made numerous appearances in various popular TV shows and as well as in movies. He made his first TV debut in 2008 acting as Lamar in two episodes of the ABC Family show, Greek. After two years, he appeared in CSI: Crime Scene Investigation.

Then Sampson played Jesse's heartbreak role in the fifth season of The CW series, The Vampire Diaries in January 2014, starring Kat Graham, and Zach Roerig. Also, he has starred in many TV shows including Gracepoint, How to Get Away with Murder, Supernatural, White Famous, The Flash, Insecure, etc.

Besides TV shows, his films' performances include Resurrection: The J.R. Richard Story, This Boy's Dream, Miss Juneteenth, and among others.

Apart from acting career, he founded the organization BLD PWR in May 2019. This organization is about new growth, transformation, and reform within marginalized groups and American society.

For access to all our exclusive celebrity biographies then visit Married Celeb!!!