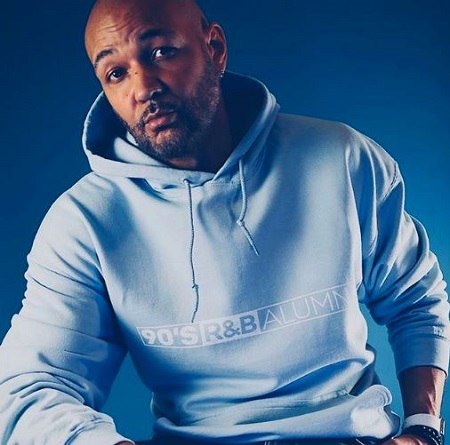 Keri Lewis is an American singer who is best known for being a former member of R&B band Mint Condition. He even released a studio ablum Meant to Be Mint on June 11, 1991, along with Mint Condition's member Jimmy Jam. However, he came to limelight after marrying a Grammy Awards winning singer and songwriter, Toni Braxton.

He was born on February 12, 1971, in Minneapolis, Minnesota, United States. As per his citizenship, he is American and belongs to the African American ethnicity Regarding his education, he studied at high school at St. Paul, Minnesota but the collage name is not known at the moment.

When Did Keri Get Divorce From His Ex-Wife, Toni?

Well, aged, 49, Lewis, and Braxton, aged, 52, are no longer together. The former couple first met on a tour of Keri's group, Mint Condition, and started dating in February 2000. After a year, they finally exchanged the wedding vows on April 21, 2001, in a private ceremony.

Braxton Family Values' star has done an abortion in her early 30s after welcoming her two sons with then-boyfriend Lewis. That same year on December 2, the couple welcomed their firstborn son Denim Cole Braxton-Lewis. Again in 2002, it was announced that they were expecting their second child together. They gave birth their youngest son Diezel Ky Braxton-Lewis on March 31, 2003.

But Diezel was born with diagnosed with autism at the age of three. Happily, Toni revealed that he has no more lasting signs of autism at the age of 13. The family of four used to their own condo in Vegas and Atlanta but later the moved into a rented house in LA due to their financial problems.

After nine years of togetherness, Keri and his wife, Toni announced their separation in November 2009. But their divorce was finalized on July 25, 2015, after being married for 12 years. Now, despite their spilt, the two still maintained their relationship as a good friend and has been co-parenting their sons together.

Re Married Again Or Not?

Following his divorce from Toni, the singer Keri is living a single life. In fact, there is no news regrading his new wife to the media. But on the other hand, his now-estranged wife Braxton has already found a new beau in her life. She has been on and off relationship with rapper boyfriend, Birdman for nearly four years.

In February 2018, Birdman popped out the question to Toni with the $1 Million cushion-cut yellow diamond ring containing her halo-style. But TMZ reported that the Un-Break My Heart's singer has lost her $2.5 million jewellery items on a plane including her engagement ring in July 2019.

But the engaged couple announced that they were separated in January 2019. But again both of them stated that the two are back together in April 2019.

How Much is Keri Lewis Worth?

As of 2020, Keri Lewis has an estimated net worth of $1 Million. He credits to his earnings to his own career as a working of singer and a member of R&B band Mint Condition. Further, he has appeared on Everybody Hates Chris, The Fresh Prince of Bel-Air, and Braxton Family Values.

Meanwhile, his ex-wife, Toni has a net value of $10 million as of early 2020. She has amassed her fortune from her career as a singer, songwriter, record producer, TV personality, and actress. Over her career, she has sold more than 67 million records worldwide, including 41 million albums.