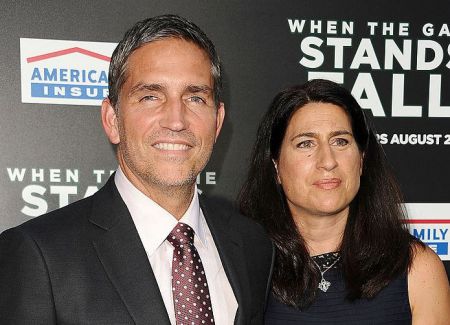 Actor Jim Caviezel is known for his portrayal of Jesus Christ in the film The Passion of the Christ and the CBS science-fiction crime drama series Person of Interest. He is one of the proficient actors who frequently gets attention for his low-key personal life. Likewise, fans become curious when it comes to his wife, Kerri Browitt Caviezel.

Kerri Browitt Caviezel is a British teacher and flutist, who is known as the wife of Jim. Although she prefers to stay away from the limelight, Kerri is a quiet woman and is accomplished in her profession.

The beautiful woman, Kerri Browitt, married her longtime partner, Jim Caviezel on July 20, 1996. The pair began dating in the year 1993 after meeting on a blind date. After three years of romance, the lovebirds eventually tied the knot. Their wedding ceremony was held at Immaculate Conception Church in Roslynn, Washington.

Kerri and her star husband, Jim is married for over 23 years as of 2019. Their love doesn't seem to fade away, and Jim's hectic schedule also doesn't bother him. Till date, it is incredible that the star couple hasn't been involved in any controversies. Another legendary couple, Tom Hanks and his wife, Rita Wilson has a blissful married life.

Both Kerri and Jim has maintained their romance equally balanced along with their profession. They are often seen together on several occasions like the movie premieres and red carpet events.

Jim and Kerri met for the first time on a blind date in 1993. During that time, Jim was offered a scholarship to study acting at New York's Juilliard School. However, he turned the offer down to portray a character in the 1994 film, Wyatt Earp.

Jim's sister set the blind date. Although having a little awkwardness, both Jim and Kerri developed a strong bond and began seeing afterward. At the moment, they both are happy with each other's solidarity.

Jim, best known in Christian circles for his role as Jesus in Mel Gibson's movie, "The Passion of the Christ," has been committed to his Catholic beliefs for a while. He along with his wife are the parents of three children; two sons named David, and Bo, along with a daughter, named Lyn Elizabeth Caviezel. They adopted Bo and Lyn in 2007, while David was adopted in 2010.

The boy, Bo whose parents abandoned him on a train as an infant was raised in the orphanage. Unfortunately, Bo also struggled with a brain tumor, but his biological parents have been side by side throughout the procedures.

Later, the couple decided to adopt a healthy newborn girl, but they met a five-year-old girl also with a brain tumor. The couple, although realizing a healthy baby would find a good home, they chose to adopt the five-year-old and have been blessed ever since.

The lovely wife of Jim Caviezel shares his net worth which is $25 million as of 2019. Apart from relation with her husband and her profession, nothing much is known. She is a graduate of the Western Washington University and was an excellent basketball player.

Further, Kerri made it to the school's president's List nine times and currently works as an English teacher at Western Washington University. Talking about her spouse wealth, he has appeared in numerous successful movies and television shows.

Stay tuned with Marriedceleb for more articles of your favorite stars!!!