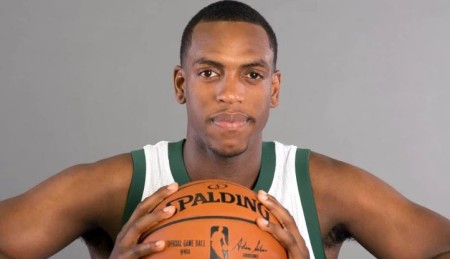 Khris Middleton is an American professional basketball player who plays as a small forward for the Milwaukee Bucks of the National Basketball Association (NBA). The two time NBA All-Star champion was selected by the Detroit Pistons of the 2012 NBA draft.

James Khristian Middleton was born on August 12, 1991, in Charleston, South Carolina, the United States. He was born to parents, James (father) and Nichelle Middleton (mother). Further, Khris has an older sister named Brittney. Also, he is a distant cousin of rapper/singer, actress and musician Queen Latifah.

The 29-year-old basketball player is currently in a relationship with his longtime girlfriend, Samantha Dutton. It is not known when the couple began dating, but Samantha first appeared on Middleton's social media in June 2017. As per sources, Khris' girlfriend is a first-grade teacher and a community activist. Like Samantha, Ayesha Curry is the partner/wife of Stephen Curry.

The couple has a daughter named, Audrielle Middleton who was born on April 23, 2019. For his daughter's birth, Khris flew on a plane to Milwaukee immediately after a playoff win over the Detroit Pistons.

Samantha has been a vital part of Middleton's life. On May 10, 2020, Khris wrote a beautiful message for his child's mother via Instagram. He wrote: "Happy Mother’s Day to this Mom and all the Moms out there! We are lucky to have you in our lives and thank you for everything you do!"

Despite having a baby together, Khris and Samantha haven't tied their knot yet. The pair are in no rush to marry soon. Also, Middleton has never revealed his plans for a future wedding. As of now, Samantha often accompanies on her boyfriend's game.

Net Worth and Contracts

The highest-paid player of Milwaukee Bucks in 2020, Khris Middleton has a net worth of $30 million. Middleton earns an impressive sum of money from his professional basketball career. As of 2020, Middleton has earned over $100 million as career earnings.

Also, he has several endorsements deals and sponsorships, which adds certain wealth in his portfolio. Another small forward for the Bucks, Giannis Antetokounmpo also has a huge net worth.

The NBA players receive a great deal of money from their contracts and salaries. Similarly, let's break down Middleton's contract. In July 2015, he re-signed a five-year deal worth $70 million with the Bucks.

As per sources, Middleton's endorsement deals is worth around $1 million. In 2018, he partnered with Milwaukee based company, Palermo's Pizza. Also, he is currently sponsored by Nike and Jason's Deli.

Khris is the founder of the Middleton Family Foundation which aims for supporting underprivileged children. Recently, he helped school-aged kids get supplies and food during the coronavirus pandemic. Also, he donated $100,000 to Fiserv Arena workers.

The Khris Middleton Basketball Camp is an annual youth basketball camp established in 2012. The camp has enrolled over 600 campers and has distributed scholarships to over 100 of underprivileged youth.