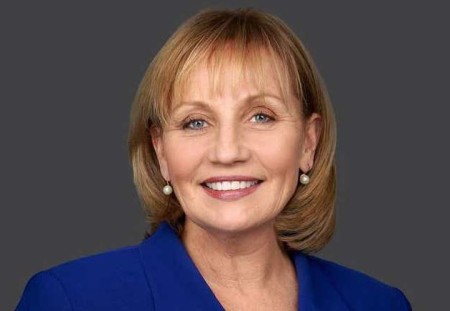 Kim Guadagno is an American politician who served as the first Lieutenant Governor and 33rd Secretary of State of New jersey from 2010-2018. Additionally, she is an attorney and former prosecutor as well. Kim is the first woman to serve as the sheriff of Monmouth County in 2007.

Kimberly Ann Guadagno was born on April 13, 1959, in Waterloo, Iowa, the United States. She is 61 years old as of 2020. Kim is the middle child of five born to parents, Mary Patricia Blevens (mother) and Charles A. McFadden, Jr. (father). Guadagno graduated with a B.A from Ursinus College. Similarly, she earned a Juris Doctor degree from the Washington College of Law in 1983.

Guadagno has been married to her longtime husband, Michael Guadagno since 1991. The couple has been together for nearly 30 years as of 2020. Kim and her spouse has three sons, Kevin, Anderson, and Michael Jr. Kevin is a graduate of the U.S. Air Force Academy and is a f-16 fighter pilot.

Like Guadagno, her husband is a former attorney who served as a judge of the New Jersey Superior Court, Appellate Division. So, how did they meet?

Kim met her husband while working as a federal prosecutor in the U.S. attorney's office in Brooklyn. Meanwhile, Michael was working in the Organized Crime Strike Force. He was prosecuting New York crime boss Joe Colombo's three sons and Kim was assigned to the case.

In 2017, Michael's resignation letter was addressed to his wife because she was the secretary of state. Both Kim and Michael has enjoyed their respective profession.

There is no exact information about Kim Guadagno's net worth. However, she might have an estimated fortune of over $5 million just like Gina Raimondo, the first female governor of Rhode Island.

As a lieutenant governor, Guadagno received an annual salary of over $141,000. Her husband Michael Guadagno earned $175,530 as a state appellate court judge, according to state records. Likewise, the husband-wife duo has a combined net worth of $12 million.

Apart from yearly salary, Guadagno received extra remuneration of $100,000, including bonuses and expenses. Before becoming a politician, Kim was an assistant to the United States Attorney for the Eastern District of New York.

After working for many years in the legal profession, Guadagno was elected as the 75th sheriff Monmouth County in 2007. She served as the chief executive and administrative officer of Monmouth County's largest law enforcement agency.

Although Guadagno was not a well known political figure, she was selected as New Jersey's lieutenant governor in July 2009. On January 19, 2010, Kim became the first woman to serve as Lieutenant Governor of New Jersey and the 33rd Secretary of State. She served under the command of the governor, Chris Christie.

In the 2017 New Jersey gubernatorial election, Guadagno was a nominee and won 46.8% of the popular vote in June 2017 statewide primary. However, she lost to Democrat Phil Murphy on November 7, 2017.

Where does Kim Guadagno work now?

Guadagno's tenure as New Jersey's lieutenant governor finished on January 16, 2018. In April 2018, she joined a law firm called Connell Foley as a partner working out of its New Jersey City office.

Since May 6, 2019, Kim has been serving as the new President and CEO of the organization called, Fulfill. The main purpose of Fulfill is to alleviate hunger and build food security in Monmouth and Ocean Counties.