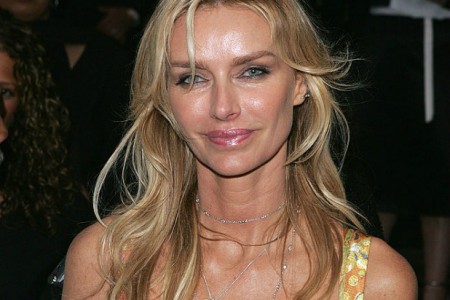 Kimberley Conrad is an American former model and actress whose fame rose to prominence after marrying the legendary Hugh Hefner, who was the founder and editor-in-chief of Playboy magazine. Conrad became Playboy's Playmate of the Month in January 1988 and became Playmate of the Year in 1989.

Kimberley Was Married To Hugh Hefner

The gorgeous actress and model was married to Hugh Hefner for a long time. She was the second wife of Hugh. They tied their wedding knot in July 1989, but the details about the marriage are hidden behind the curtains. At the time of their marriage, Hugh was 63 years old, while Kimberly was 26.

Conrad and Hugh had two sons named Marston Glenn, who was born in 1990, and Cooper Bradford, born in 1991. The E! True Hollywood Story profile stated that Conrad transformed the notorious Playboy Mansion into a family-friendly household for her children. With his first wife, Mildred Williams, Hefner had two kids, a son named David and a daughter, Christie.

From Separation To Divorce

Kimberly and Hugh separated after nine years of their marriage in 1998, although remaining nominally married. After separation, Hefner continued to live at the Playboy mansion, while Kimberly moved into a home next door with the couple's two young sons.

About the separation, Hugh quoted, "I would've been happy to divorce her when we separated, but she wanted to remain married for our boys." Also, records showed that Kimberly filed for divorce, but the petition was withdrawn.

After eleven years of separation, Hefner filed for divorce with his wife, Kimberly. He asked a judge to order him to pay $20,000 a month in spousal support, which was half the amount he was paying before.

Further, Kimberly sued Hefner in August 2009, claiming that he owed her $4 million under their prenuptial agreement. When they separated, Hefner paid $750,000 to his wife. Also, he claimed to have given almost $12 million to Kimberly before the divorce.

Hefner filed for divorce stating irreconcilable differences, but he also claimed that the main reason behind their divorce was Kimberley's unfaithfulness. He said: "During the marriage, I was faithful, and she was not."

As per sources, Kimberly dated British rock singer and songwriter, Rod Stewart back in 1998. Also, she dated Quincy Jones in 2005. Kimberley and Hugh's divorce was finalized on March 2010.

He also added his marriage to Conrad was an attempt to see refuge from the woes of the Eighties, in which the business went sour, and he had a stroke. After Conrad, Hefner began a relationship with model and tv personality, Crystal Harris. They married on December 31, 2012, after previously breaking off their engagement on June 14, 2011.

How much is Kimberley Conrad's Net Worth?

Kimberley Conrad received a hefty sum of cash after separating from Hugh Hefner. As per Hefner's statements, he paid more than $10 million, including spousal support and additional expenses. Conrad's actual net worth is difficult to tell, but she has a net worth of no less than $5 million.

The market researcher claimed that Hefner was worth at least $110 million, while other sources said at the time of his death, Hefner's net worth was $45 million. In 2012, it was reported that Hefner's wealth would be left to his children, the Univeristy of Southern California film school, and a variety of charities.

The above article is about the former model and actress, Kimberley Conrad. She is best known as the second wife of Hugh Hefner, late magazine publisher and founder of the Playboy. To know about your favorite star, follow marriedceleb.