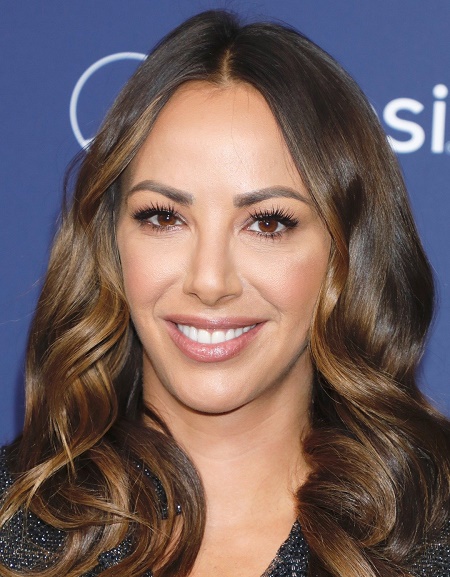 Have you ever watched the American reality television series, Vanderpump Rules, that premiered on Bravo January 7, 2013? Then, the actress, Kristen Doute, is not a new name for you who staring as the main character on the show since season one in 2010. In addition to acting, she works as a television personality, entrepreneur, clothing designer, and author as well.

Following her on-and-off relationship with ex- Brian, the Vanderpump Rules' star's officially dating her new boyfriend whose name is Alex Menache. She recently introduces Alex throughout Instagram on Saturday 14 May 2020 by posting pictures of them cuddling up together.

She captioned the post: "he wanted a photo with his hair done but this is my Instagram", where Meanche commented HEY🥰." She also shared the next image of the pair on the same day wearing a matching outfit saying:" Pretty tie-dye fly.

In the midst of her Instagram post, her fellow Bravo costars like Ariana Madix, Lala Kent, and Schaena Shay, filled the comments sections with messages of support for the new couple.

Shares Custody of her Dogs with Ex-Boyfriend, Brian Carter

37, Kristen met her former lover, Brian Carter, through the Bumble dating app where they had 25 mutual friends including Stassi, Jax [Taylor], Maloney-Schwartz, and Tom Schwartz. They began dating after a few romantic getaways in 2015.

However, they split in September of the last year 2019, after many ups and downs between the two. Since breaking up, the reality television personality said she had nothing but love and admiration for him revealing, "I've moved on. I think he's doing the same thing."

On the Bravo reality show's eighth season, the 1.75 m tall stated that they ended up on good terms with each other and have managed to co-parent their dogs since their breakup. She also added that the two pets are currently live with her in COVID-19.

She said: “We are doing the best we can to co-parent the dogs, and by that I mean the dogs are with me during quarantine". In addition, Kristen also dated her two last boyfriends named James Kennedy and Tom Sandoval.

The Net Worth of Kristen Doute

Kristen Doute is an American reality TV star, model, waitress who has an estimated net worth of $1 Million as of 2020. She makes most of her income from show, Vanderpump Rules, a spin-off of Beverly Hills' The Real Housewives, and her other business ventures.

As for her salary, Doute reportedly makes likely $25,000 per episode. Along with the Vanderpump Rules Bravo show, she has a fashion line named James Mae, which was launched in 2014. Also, she has her wine company named Basic Witch Potion No. 1 and 2, with partnership along her co-stars Stassi Schroeder and Katie Maloney-Schwartz.