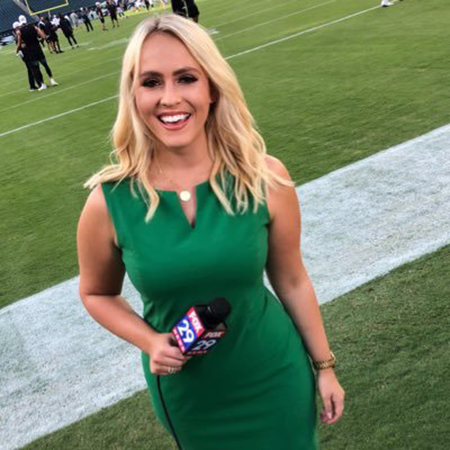 American sports anchor and reporter, Kristen Rodgers, is currently serving at Fox 29. A journey from a volunteer to a sports anchor is not an easy job, but she did manage to do so with her hard work and dedication.

Rodgers was born in the United States. Her nationality is American and belongs to White ethnicity.

Is Kristen Rodgers Dating Anyone?

Kristen Rodgers is single as of 2019, but her Instagram posts tell a different story. She keeps on posting several pictures with a mysterious man who seems like something's going on between them. Have a look at the picture,

The couple, however, speaks nothing regarding their relationship. But her fans are speculating him as her boyfriend. So, one can wonder whether they are together or not.

Kristen Rodgers is a journalist by profession from where she makes a good amount. Her net worth is around $500 Thousand to $800 Thousand, which is similar to Morgan Wolfe and Daniella Diaz.

Even before Rodgers graduated from the University of Southern California, she joined the International Olympic Committee as a volunteer. While in the committee, she used to help in organizing the IOC's Conference on Women and Sport.

After a month, the beautiful reporter shifted to NBC Olympics as an intern. She was one of the participants in the broadcast of the Olympics. In addition, she did sports writing intern at Bleacher Report from May 2012 to August 2012. In the same year in 2012, she also worked at Annenberg TV News as a sports multimedia director.

The reporter further started serving as a broadcast coordinating assistant in KABC Sports from January 2013 to May 2013. During her tenure, she interviewed many famous teams like Lakers and Kings. Similarly, she joined Fox Sports in May 2013 as an on-air reporter.

After working in Fox for a year, she studied at the University of Southern California. Three and ten months later, Kristen again joined Annenberg TV News, but this time as a sports director.

Since August 2014, Rodgers is working at KEZI-TV as a sports anchor and reporter. Likewise, she is also serving at Fox 29 TV on the same post.

Stick on marriedceleb, to know more about celebrities.