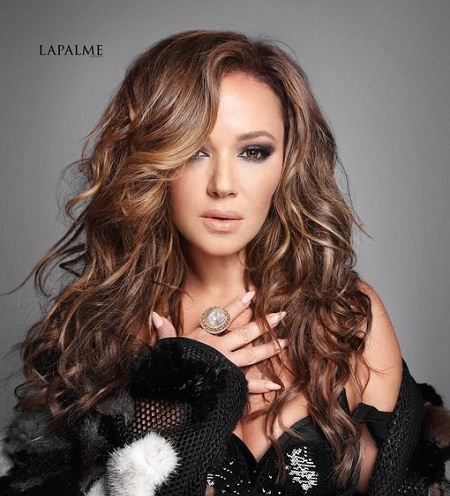 American actress, author, and activist, Leah Remini is one of the prominent face in the entertainment industry. However, she got huge fame and reputation after starring on the long-running CBS sitcom The King of Queens (1998–2007) as Carrie Heffernan. Also, she is known for her role as Vanessa Celluci in the CBS sitcom Kevin Can Wait (2017–2018).

Leah Marie Remini was born on June 15, 1970, in New York City, New York, U.S. She is the daughter of a schoolteacher, Vicki Marshall, and George Remini, the owner of an asbestos removal company. She has two biological sisters named Michael, Nicole, and four stepsisters named Elizabeth, Shannon, Christine, and Stephanie (died in 2013).

Who is Leah Remini's Husband?

He is none other than American actor, Angelo Pagan. He is known for his performances including The King of Queens (1998), Swordfish (2001), and Hawthorne (2009).

As of now, Leah, 50, is committed to her long-time partner, Angelo, 50, for nearly 17 years now. The two first met in a Cuban club and restaurant called El Floridita in 1996. And their first meeting was love at first sight for both of them.

Nearly six years of love romance, the lovebirds tied the knot on July 19, 2003, in a private ceremony. Their big day was held in attendance of dozens of guests at the Four Seasons Hotel in Las Vegas, Nevada.

A year after marriage, the newlyweds gave birth together to their firstborn child or daughter Sofia Bella Pagan. Sofia was born on June 16, 2004, at 3:01 PM in Los Angeles, California. In addition, the American actor, Angelo shares three sons, Nicholas, Alex, and Angelo Jr., from his past relationships.

How Much is Leah Remini' Net Worth?

The American actor, Leah Remini has a net worth of around $25 million as of early June 2020. She has amassed that worth from her three decades of professional career as an actress, author, and activist.

As a salary, the 160 cm tall reportedly earned $9 million from her final year on the CBS' show CBS, The King of Queens. She later reunited on the new show, "Kevin Can Wait," with Kevin James, where she makes roughly $125,000 per episode. Moreover, she made a million dollars through her job and show appearances A&E called "Leah Remini: Scientology and Aftermath."

Also, Leah's made a huge sum of money from her book sales including Troublemaker: Surviving Hollywood and Scientology, Kiss My Cellulite. She has also starred in the tv ads for Mandee clothing (1985), Quaker State Motor Oil (2000-2002), and Pacer Center’s Bullying campaign (2013).

The mother of one proudly celebrates the news shortly after the actor Danny Masterson was charged and arrested for the allegation of raping three women.

She shared her excitement about the charges to Twitter saying: “Finally, victims are being heard when it comes to Scientology!”. She added: “Praise the Lord! This is just the beginning Scientology, your days of getting away with it are coming to an end! #Justice #Scientologythe aftermath.”

The actress Leah Remin has been one of the most diehard celebrity members of the Church of Scientology from the age of nine. Scientology members also include her fellow actors Jenna Elfman, Giovanni Ribisi, Kirstie Alley, John Travolta, and Tom Cruise.