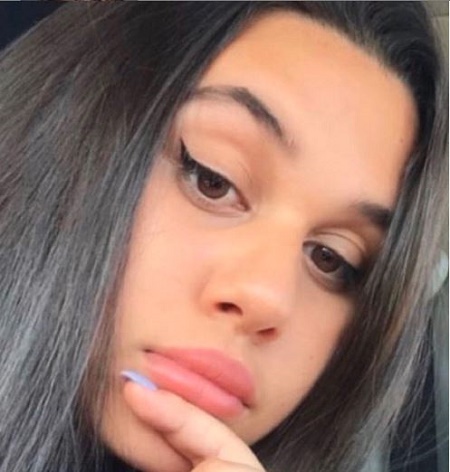 Have you ever heard the name of American actress, author, and activist, Leah Remini? If yes, then you are close to her family members. Well, today we are sparking bio about Leah and her husband, Angelo Pagan's single daughter, Sofia Bella Pagan.

The American celebrity daughter Sofia was born on June 16, 2004, at 3:01 PM in Los Angeles, California. She is the grandchild of Vicki Marshall and George Remini. Further, she has three half-siblings named Nicholas, Alex, and Angelo Jr. from her dad's previous marriage. She holds an American nationality and belongs to a mixed ethnical background.

How is Sofia Bella Pagan’s Life is Going?

It would come as no surprise that teens of Sofia's age are in a romantic relationship. Whereas the 16-year-old star-kid also belongs to the same generation. But unfortunately, she is living a happy single life without getting involved in any dating affairs.

Rather than dating a boyfriend, Bella Pagan is more focused on her studies and is enjoying her life with her family. She has a really happy relationship with her supportive parents, Leah and Angelo, who love them a lot. Her mom, meanwhile, loves to share her silliness with the rest of the world.

Sofia's dad, Pagan, 52, and mom, Remini, 50, are happily married for nearly 17 years now. The two had their first interaction in a Cuban club and restaurant called El Floridita in 1996. And their first meeting was love at first sight for both of them.

Nearly six years of love romance, the lovebirds tied the knot on July 19, 2003, in a private ceremony. Their big day was held in attendance of dozens of guests at the Four Seasons Hotel in Las Vegas, Nevada.

A year after marriage, the newlyweds gave birth together to their firstborn child or daughter Sofia Bella Pagan. Likewise, Leah and Angelo were devoted to Scientology before Sofia 's birth. But when Sofia was about nine years old in 2013, they left and had her baptized two years later.

In addition, the American actor, Angelo has three sons, Nicholas, Alex, and Angelo Jr., from his past relationships.

How Rich is Sofia Bella Pagan?

Sofia is not engaged in any job or work at the current moment. Therefore, her personal income and wealth are out of the question. But currently, she is living a very rich lifestyle under her parent's prosperity.

Whereas her mother, Leah Remini has a net worth of around $25 million as of June 2020. She has amassed that worth from her professional career as an actress, author, and activist. While her father, Angelo Pagan's total asset is roughly around $5 million.

The entire family now resides in a mansion of 9300 square feet in Studio City, California. In 2003, the couple spent the home $3.75 million, and it features 5 bedrooms and 9 baths. Today it is estimated that the property is worth $8.5 million.