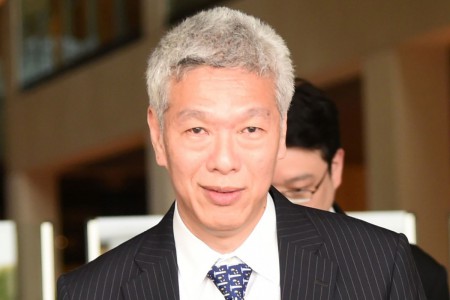 If you know the late Lee Kuan Yew, first Prime Minister of Singapore, then you probably know about his political legacy. During his tenure, Yew forged a system of meritocratic, highly effective and incorrupt government/civil service. But today, we will be talking about Yew's youngest child, Lee Hsien Yang.

Lee Hsien Yang is a Singaporean business executive. He served as the former Chairman of the Civil Aviation Authority of Singapore (CAAS) from 2009 to 2018. Also, he was the Chief executive Officer of Singapore Telecommunications Limited (1995-2007).

Yang was born in 1957 in Singapore to a high-class political family. His exact birthdate is unavailable so as of 2019, Yang must be around 61-62 years old.

Lee finished his secondary education at Catholic High School and pre-university education at National Junior College. Further, he received an award of the President's Scholarship and the Singapore Armed Forces Overseas Scholarship given by the Public Service Commission.

Moreover, Yang graduated from Trinity College, Cambridge, with a double first in engineering science. Also, he has a Master of Science in management from Stanford University.

Lee Hsien Yang was born to parents Lee Kuan Yew and Kwa Geok Choo. His late father Yew, the first Prime Minister of Singapore, governed the country for three decades. Meanwhile, his mother Choo was a lawyer and the co-founder/partner of a law firm, Lee & Lee.

Yang's Brother Is The Current PM Of Singapore

He has been the Prime Minister of Singapore since 2004. He became the youngest Brigadier-General in Singaporean history after his promotion in July 1983.

Yang's older and middle sister, Lee Wei Ling is the head of the National Neuroscience Institute. The 64 years old doctor is also an author of a book called 'A Hakka Woman's Singapore Stories: My Life as a Daughter, Doctor, and Diehard Singaporean.'

Wife-Lim Suet Fern Is More Than Just A Lawyer

Yang and his longtime wife, Lee Suet Fern have been married for thirty-eight years as of 2019. The couple met when both were students at the University of Cambridge. The Lee couple married each other in 1981.

For your information, Yang's spouse, Fern is a lawyer and the daughter of economist Lim Chong Yah. Also, she is the founder and managing partner of Stamford Law Corporation. Further, Fern served as the former president of the Inter-Pacific Bar Association (IPBA).

Another powerful female is Lyudmila Putina, who is the former first lady and wife of the Russian President, Vladimir Putin.

On June 29, 2019, Yang attended "Pink Dot," an annual event that started in 2009 in support of the LGBTQ community in Singapore.

Lee was accompanied by his wife, Huanwu, and his husband, Yirui. When asked about the LGBTQ community, Lee said that he was happy for Li and Heng.

About Yang's net worth, there is rarely any information available. He hasn't revealed his actual salary, but by assumption, we can say that his net worth is over S$2 million. The primary source of his income mostly come through his profession as a business executive.

Throughout his career, Yang has served in the many vital positions and has made a stupendous fortune. He is the Non-Executive Independent Director of Rolls-Royce Holding PLC. Also, he worked as the chief executive of Singapore Telecommunications Limited for 12 years.

As the Non-Executive Independent Director of Rolls-Royce Plc, the total compensation of Hsien Lee at Rolls-Royce Plc is $74,000. Hence, we can say that he earned a desirable amount of income.

Know What Yang Said About His Brother's Ruling Party

The Singapore prime minister’s estranged brother has thrown his support behind a newly-formed opposition party in an intriguing twist ahead of elections expected to be held as soon as this year.

the ruling People’s Action Party (PAP) “is no longer the PAP of my father” and “has lost its way.” Due to his support to the opposition party, many politicians have assumed that Yang might stand as a candidate in the upcoming general elections.

Lee and his sister, Lee Wei Ling, were deeply involved in a dispute in 2017 with their older brother Lee Hsien Loong. The two younger siblings said their brother had abused executive powers to block the demolition of a family home against the wishes of their late father.

The historic property is estimated to be worth around S$24 million, according to estate agents. The century-old house at 38 Oxley Road with an estimated 12,060-square foot plot was the place of late Mr. Lee Kuan Yew since 1945.

What will happen to the multi-million dollar House?

As per Yew's will, sources revealed that he had expressed his wish for the house to be torn down after his death. Also, the house was to be demolished when his daughter Ling no longer lives in it.

Recently on September 10, 2019, Dr. Lee Wei Ling through her Facebook, reminded that her father always wanted his house at 38 Oxley Road to be demolished. She also explained that she brought up the topic again because of the uncertainty concerning the demolishing of 38 Oxley Road.

Lee Siblings Turned Against Their Brother

Yang and his sister "felt threatened by Lee Hsien Loong's misuse of his position and influence over the Singapore government and its agencies to drive his personal agenda." They alleged that their brother thwarted the will of their father to use the house as a monument to milk his father's legacy.

A special parliamentary session was held to clear the Prime Minister of any wrongdoings, and the siblings agreed to keep the dispute private after the session.

Singapore’s next General Election is set to take place on December 14, 2019. However, ruling party People's Action Party members and ministers are arguing over the limited time. Also, some sources report that Singapore’s next general election must be held by January 2021.