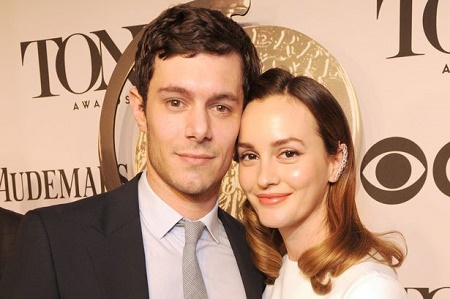 The former Gossip Girl star, Leighton Meester (33), and her husband of six years, Adam Brody (40), are soon going to be parents. The couple was seen on April 2, 2020, heading out to Los Angeles for their usual walk. Leighton was seen in public after three months as she wasn't pictured since January.

Leighton and her actor husband were walking beside their first daughter Arlo Day Brody. Her baby bump was clearly visible, and the news instantly spread across online. No wonder her fans are showering congratulations message as she will soon welcome another child in her family.

Meester dressed casually in her black maternity wardrobe, along with a grey T-shirt and Nike shoes. She had put her hair back into a bun and was wearing sunglasses. Not her regular looks, you agree?

One of the hottest actresses, Leighton, and her handsome spouse, Adam tied their wedding knot on February 15, 2014. Their marriage ceremony took place privately. Similarly, the two had engaged back in 2013, just one year before of wedding.

The lovebirds who had their first interaction on the set of the film, "The Oranges," now live a joyful life together with no troubles. They have been married for over six years.

The husband-wife duo welcomed their first baby daughter Arlo Day Brody on August 4, 2015. However, the two are extremely private about their daughter and make very few public appearances.

In 2017, the Roommate actress revealed that she doesn't prefer to talk about her daughter out in the media. However, Meester also said that her four-year-old daughter is the only person whom she loves more than anyone.

This low-key couple is proud parents but tends to keep out of the spotlight regarding their kid. Pictures of their daughter typically came from the paparazzi. Similarly, actor Orlando Bloom and his fiance Katy Perry are also welcoming their first-born in 2020.