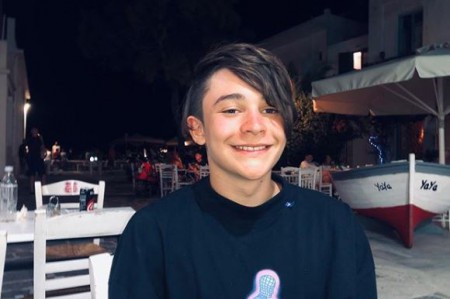 The 18-year-old, Leondre Antonio Devries is a British singer and rapper who is one of the founding members of the British pop duo, "Bars and Melody." The young singer along with his partner, Charlie "Melody" Lenehan finished in third place in the eighth series of Britain's Got Talent in 2014.

During BGT audition, the duo was automatically sent into the semifinals after receiving the "golden buzzer." Previously, he rapped solo under the stage name 'Little Dre.' Devries has spoken openly about his experiences of bullying for four years in school. Another young rapper, MattyBRaps also has a similar career trajectory.

The young and talented rapper, Devries, is currently dating a beautiful girl named, Carla Brocker. The pair are known for their adorable pictures on social media. Further, Carla's popularity increased after her relationship with Devries.

Leondre and his girlfriend, Carla began dating in early 2018. They never miss their chance to show their love for each other on social media. Also, it seems that the boyfriend-girlfriend duo is enjoying each other's company.

On August 31, 2019, Leondre shared a picture on his Instagram, where he can be seen kissing Carla on lips. Therefore, the lovebirds are happy with their relationship and might take it into the next level when the right time comes.

Talking about Devries' girlfriend, Carla, she became famous after dating him. On Instagram, she has over 94,000 followers. On the occasion of International's Women's' Day, Carla and Leondre visited Austria.

Bars and Melody on Britain's Got Talent

The British pop duo consists of rapper Leondre and singer Charlie Lenehan. They first met on Facebook in September 2013 and in-person in January 2014. Afterward, they decided to form a music duo as Bars and Melody. Another young singer, Caly Bevier was a semi-finalist of another show, America's Got Talent's season 11.

On February 8, 2014, Bars and Melody auditioned for the eighth series of Britain's Got Talent. They performed a song based in Twista with Devries replacing the original verses with ones protesting against bullying. After the performance, judge Simon Cowell pressed the golden buzzer, sending them straight through the live semifinals.

According to Billboard magazine, the video of their audition was number six in the top ten trending videos for 2014. Similarly, it is also the most viewed auditions of BGT with more than 200 million views.

The Bars and Melody duo signed a £500,000 ($614,177) record deal with Simon Cowell's record label, Syco, which released "Hopeful" in July 2014. Afterward, they have been active in the music industry with doing tours in many countries.

As the rapper of Bars and Melody, Leondre Devries has maintained a net worth of $2 million as of 2019. In 2016, the duo also became ambassadors for the Anti Bullying Charity campaign. In early 2019, Bars and Melody released a single from their upcoming album. A few weeks later, they embarked on their tour called "Choke Tour" from late March until late April in August 2019.

How does Leondre spend his millions? Looking through his Instagram, one can see that, Devries enjoys his life as just a typical teenager wants. However, due to his enormous success, Leondre can afford many luxurious entities such as a stunning Jaguar, a beautiful house, and properties. Also, he visits different countries for vacation.

Do visit Marriedceleb for interesting articles!!!