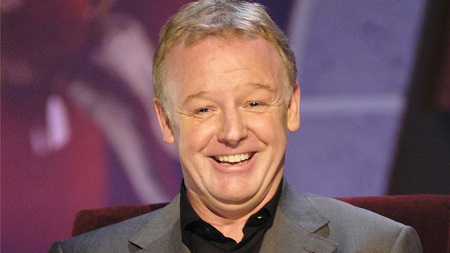 Les Dennis is a British comedian, television presenter, and actor who is best known for hosting the TV game show, Family Fortunes, for 15 years from 1987 until 2002. Further, he is known for his role as Michael Rogers (later changed to Michael Rodwell in long-running ITV soap opera Coronation Street. Also, he was a contestant of reality television franchise Big Brother in the 2nd season in 2017.

Leslie Dennis Heseltine was born on October 12, 1953, in Garston, the United Kingdom. He is the son of late Leslie Heseltine who worked in a betting shop and Winnie Grimes (died in 1977) who worked in a factory. He has an older sister named Margaret. He attended the Stockton Wood and Calderstones School.

Following his twice married, Les, aged 66, has been living a healthy marital relationship with his current wife, Claire Nicholson. She is an actress who is known for her works NY-LON (2004), Crush (2001), and Mrs. Brown (1997).

The couple first met in November 2005, in memory of former Holby City actress Laura Sadler of at the fundraising Butterfly Ball. After nearly three years of love romance, Dennis and Nicholson walked down the aisle on 23 November 2009 at Augustine of Canterbury Church in Highgate.

The function was held among 160 guests including Lionel Blair, Michelle Collins, Sherrie Hewson, Carol McGiffin, Denise Welch, and others. During the register office ceremony, the couple's daughter Eleanor served as a flower girl when she was 19 months.

The bride Nicholson donned the strapless with full-length ivory silk gown by Rosa Clara. Similarly, the groom's son Phillip from his first marriage also attended the function. Now, they have completed their 11 years of spousal.

From their union, they have two children together. Before marriage, the couple had one baby girl Eleanor Grace Heseltine who was born on April 24th, 2008 in London. She weighed 8 lbs and 11 oz during her birth time. On 14 April 2011, their youngest son Thomas Christopher was born.

His First and Second Marriage's Details

Before Claire, he had divorced two times. His first marriage was with his first wife, Lynne Webster, with whom he has one son Philip Heseltine. They were together from 1974 to 1990.

Then, The Sound of Musicals' presenter and performer went to marry his second wife or actress, Amanda Holden, aged 49. They got hitched on 4 June 1995 in Bournemouth. But they had a temporary split after Holden's vacation picture with actor, Neil Morrissey was exposed in a newspaper in May 2000.

In December, Les and Amanda officially had divorced after wedded for seven years. On 18 November 2003, their divorce was finalized. Now, the media personality is married to British songwriter, Chris Hughes since 2003. They have together two daughters named Hollie Rose Hughes, and Alexa Louise Florence Hughes.

Also, Heseltine had a love affair with actress and television presenter, Sophie Aldred, 57.

How much is Les Dennis worth?

Les Dennis has an estimated net worth of $1 Million as of July 2020. He credits his fortune to his professional career as a television presenter, actor, and comedian. Likewise, he has worked as a presenter of Family Fortunes from 1987 until 2002.

Similarly, the British's presenter makes an annual salary of about £23,746 while the actor earns £35,000 in a year. Well, he is active in this field for about 49 years so his payroll also valued in the same range. Moreover, he has authored one book named Must The Show Go On?, which was published in early 2008.

Meanwhile, her former partner, Amanda has a net value of $6 million as of early 2020. She has acquired her wealth from her profession as an actress and presenter. Her acting credits are EastEnders, Kiss Me Kate, and Wild at Heart.