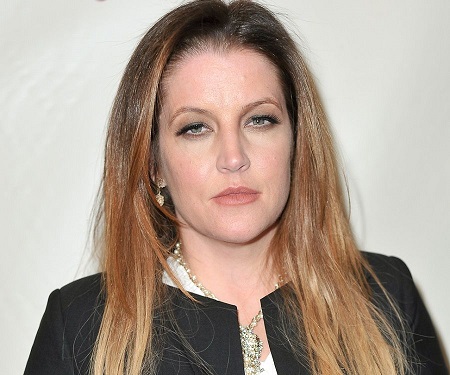 Lisa Marie Presley is an American singer-songwriter who is active in the music industry for over two decades. During her career, she has released three studio albums named Storm & Grace, To Whom It May Concern, and Now What. However, she is probably most famous for being the daughter of actress and business magnate, Priscilla Presley, and late singer, Elvis Presley.

She was born on February 1, 1968, in Memphis, Tennessee, the United States to Elvis and Priscilla. Her parents were married from 1967 to 1973. But she lost her dad who died in August 1977, when she was nine. Her grandparents are Vernon Presley, Gladys Presley, Anna Lillian Iversen, and James Wagner. So far, Lisa holds American citizenship and is of mixed ethnicity.

Yes, you have read that correctly. Presley has been married for the fourth time in her entire life. At first, she got married to Chicago-born musician Danny Keough on October 3, 1988. Together, they had two kids, a daughter Danielle Riley Keough, born on May 29, 1989, and a son, Benjamin Storm Keough (October 21, 1992. Sadly, Benjamin died on July 12, 2020, of suicide.

But Lisa got divorced from her first husband Danny on May 6, 1994. 20 days later her separation from Keough, she started dating a famous singer Michael Jackson, whom she first met at the age of 7 in 1975. Since her childhood, she used to attend Michaels' concerts in Las Vegas.

According to a friend of Presley's, their adult friendship began in November 1992 in L.A." After two years of dating, they married in 1994 and had parted their ways in January 1996 citing irreconcilable differences. They had actually spent four years together on and off after their divorce in an effort to reconcile.

Then after, Presley became engaged to rocker John Oszajca, in 2000. But she called of her engagement with John after meeting an actor and filmmaker, Nicolas Cage at a party. Her third wedding was with Cage whom she tied the knot on August 10, 2002. On November 25, 2002, Nicolas filed for divorce and the divorce was settled in 2004.

In 2005, Marie started became close to her ex-husband, Danny. In fact, she and Keough were planning to remarry but failed to continue their relationship. Afterward, the singer Presley went to marry her fourth husband, Michael Lockwood,  a guitarist and producer.

On January 22, 2006, they walked down the aisle in a private ceremony in Japan. She revealed in March 2008 that she was pregnant, amid rumors about her apparent weight gain. She gave birth to the fraternal twin girls, Harper Vivienne Ann and Finley Aaron Love, via Caesarean section on October 7, 2008, at Los Robles Hospital & Medical Center in Thousand Oaks, California.

The twins weighed 5 pounds 2 ounces (2.3 kg) and 5 lbs 15 oz (2.7 kg) respectively during their birth time. Lisa filed for divorce from Lockwood in 2016 after being married for ten years. Then her daughters had been taken into protective custody in February 2017 and also rejected Lockwood 's offer for spousal support.

How Much is Lisa Marie Presley's Net Worth Today?

As of July 2020, Lisa Marie Presley has an estimated net worth of -$16 million. She has amassed her fortune through her music career and managing the world's oldest and oldest Elvis museum in the world named Graceland.

After the death of her dad, Elvis, she and her grandfather Vernon and her great-grandmother Minnie Mae Hood Presley became a joint heir to his assets. But then after Vernon 's death in 1979 and Minnie Mae 's death in 1980, she became the sole successor, and Graceland was inherited by her when she was just 12.

At the time, it was reported that the estate was worth $100 million, approximately $295 million in dollars today. She inherited the estate officially on her 25th birthday, in 1993. But she sold 85 percent of Elvis' assets in February 2004. She sold Graceland for $100 million to Core Media Group, an intellectual property firm.

To date, Lisa retains 100 % ownership of Graceland itself, including the 13 acres of land and personal things from her late dad. Meanwhile, her mom, Priscilla Presley has a net value of $50 million.