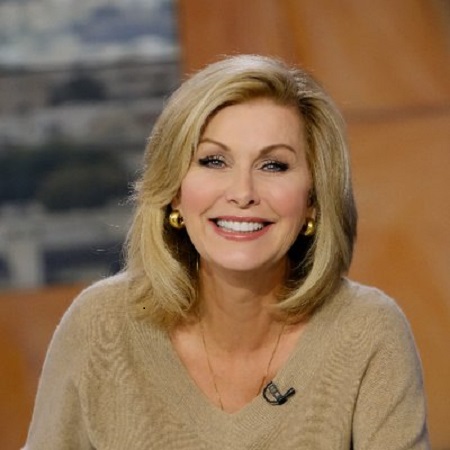 Lisa McRee is a Five Times Emmy Award-winning American television journalist and former news anchor who is best known for working for ABC's Good Morning America as a co-anchor. Currently, she serves for the Spectrum News 1 SoCal on Spectrum Cable Network as a news anchor. Also, she appears in the lives of the Los Angeles Times Today in the evening.

Lisa was born on November 9, 1961, in Fort Worth, Texas, United States. Her birth name is Lisa Annette McRee. As per her citizenship, she is American and is of white ethnicity. Regarding her education, she studied at the University of California, Berkeley with a major subject in management.

Who is Lisa McRee' Husband?

He is none other than, Don Granger. He is an American film producer who is best recognized for his works including Mission: Impossible – Rogue Nation, and Jack Reacher.

Believe it or not, Lisa, aged 58, first met her husband Don on a blind date in the early 1990s. But the information regarding their love life is not known to the media. After remaining unmarried couple for a few years, they finally tied the wedding knot in 1996 in the private ceremony infornt of their loved ones.

Since then, they are leading a blissful married life together with no sign of divorce. Now, they have completed their 24 years of the marital relationship. Together, they have two teenage children, both of them are around 20.

Their firstborn child or son is Will Granger whose actual birth date remains private. While on June 4, 2001, their youngest daughter Kate Granger was born. Now the whole family most enjoys their vacation together and lives a happy life in L.A.

What is Lisa McRee's Net Worth?

Well, Lisa has enjoyed a long career in the journalism industry spanning almost three decades. So, from her work as a news anchor, she has been able to collect a huge fortune. As of early 2020, her total net worth is valued to be over $1 Million, which is alike to Jennifer Lahmers and Christie Ileto.

Today, McRee works for Spectrum News 1 Network as a news correspondent. As per sources, the annual pay for Spectrum News NY1 Anchor/Reporter is around $73243. Now looking at her career graph, she might be earning over $70,000 in a year.

McRee made her TV debut as a news anchor at WFAA-TV in Dallas, Texas, where she worked from 1989 through 1991. Then, she became one of the initial anchors of ABC News' World News Now along with Aaron Brown, in 1992. But in 1993 she left the show to serve on Good Morning America Sunday.

She then started working as an anchor for KABC-TV. In 1977, she was hired by Good Morning America as co-anchor by succeeding Joan Lunden as co-anchor. At the show, she was connected with Kevin Newman after Charles Gibson split the show in 1998. But in 1999, she was replaced by Diane Sawyer.

Between 2004 and 2007, Lisa worked as a host and reporter for the TV news magazine that aired on 12 PBS called California Connected. She began filling-in in 2017 as co-anchor of Good Day LA on KTTV, a Los Angeles affiliate of Fox Broadcasting.

Today, she anchors Your Morning on Spectrum News 1 and Los Angeles Times Today.