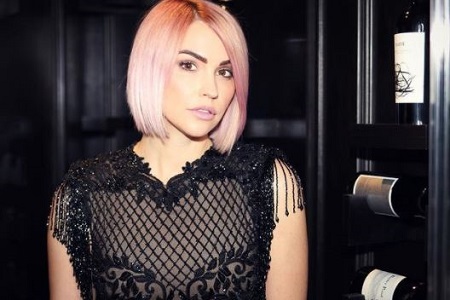 Lisa Stelly is an American actress and entrepreneur who is known for her works Passed Over (2009), Green Day: 21 Guns (2009), and Green Day: 21st Century Breakdown (2010). Further, she is a chief executive and creative director of Fancy Sprinkles, a bakery shop.

She was born on March 4, 1987, in Los Angeles, California, United States. She holds American citizenship and belongs to the white ethnicity. However, there is not much information regarding her parents' and siblings on the media.

Yes, you have read that correctly. Jack's ex-wife Lisa has found a new partner in her life. She is reportedly dating to American actor and singer, Skylar Astin. He is famous for his roles Jesse Swanson in the films Pitch Perfect (2012) and Pitch Perfect 2 (2015).

On July 11th  2020, Stelly finally made official that she and her new beau Skylar are dating each other by posting the kissing photo of two on her IG account. She wrote: "Is that a bottle of mini champagne in your pocket or just happy to see me".

On the next day, Astin also shared a cosy shot of the duo in a pool on his Instagram account. "I am dating FOUNDER, ENTREPRENEUR, MOTHER, CCO, etc, Lisa Stelly," Treat Your Ladies Better", he wrote.

The 33 years old Lisa was previously married to her now estranged husband, Jack Osbourne, 35. He is an English TV host/producer and actor who is famous for starring in his family's reality TV show, The Osbournes from 2002–05.

Osbourne and Stelly tied the wedding knot in paradisiacal Hawaii on 7 October 2012 in front of 48 close friends and family member. It seemed that they had the perfect marriage for six years. But they announced their separation on 18 May 2018. They finalized their divorce on 5 March 2019 almost after a year.

During that time, they confirmed that they still love each other and are in friendly conditions for the sake of their girls. But just months after their breakup the police registered a battery report against him for punching Lisa's new boyfriend Skylar.

Just like Lisa, her new boyfriend Astin was once married to his Pitch Perfect co-star, Anna Camp, 38. They got hitched in 2016 and had divorced in 2019 after six years of union.

Stelly and her former spouse, Jack are parents of three children. Before their nuptials, they welcomed their first child or the eldest daughter Pearl Clementine Osbourne on April 24, 2012.

How Much is Lisa Stelly Net Worth?

Lisa Stelly has an estimated net worth of $4 Million as of 2020. She has accumulated her impressive fortune throughout her own business career. She has founded the bakery shop named Fancy Sprinkles.

Meanwhile, her ex-husband, Jack Osbourne has a whopping net worth of $15 Million as of 2020.  He has earned his fortune throughout his own profession working as a TV host/producer and actor.

On the other hand, her current boyfriend, Skylar Astin has a net value of $1 million, as per Celebrity Net Worth.