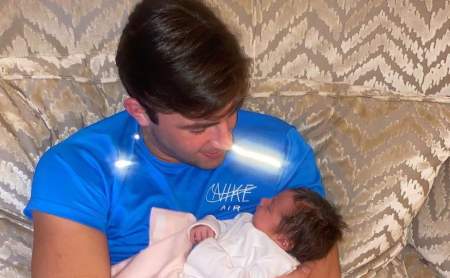 Life After Love Island actor, Jack Fincham is now a new and responsible father to his newly born baby girl, Blossom Fincham, who was born on Friday, 24th January 2020. Fincham's daughter weighed 8 pounds 2 oz during the time of the arrival at birth.

The mother of Jack's baby girl is Casey Ranger, a health compliance officer, 29. On the other hand, Jack and Fincham split up after dating for few months in 2019 due to some misunderstandings, but they're co-parenting their first child.

The former pen salesman, Fincham shared a lovely picture while carrying his daughter in his arms on 25th January 2020. In his Instagram post, he wrote a heart touching story about himself and his little girl who changed her life after her arrival.

Charles said that he is normally a very open book and shares most of his life on social media. He further told, "This Blessing I chose not to. I'm just a normal geeza, who went on a tv show, which throws you straight into the public eye... which I will forever be grateful for."

Check out the introduction of Jack Fincham

The 28-year-old actor, Fincham then proclaimed that he needs a personal time for himself to keep his part of life private, preparing for the upcoming responsibilities and part of him that will change his life forever. He said, "This is undoubtedly the best thing that has ever happened to me, and it's true what they say, the instant feeling of love and connection you have with your child is a feeling like no other."

In the third line of Fincham's Instagram caption, he expressed his feeling, saying, "I want to thank my family and friends for your continued support, also to my little girl's mother, who has been totally AMAZING throughout. Although we are not together we are great friends as we have been for many years and our priority is co-parenting our beautiful baby girl. Both mum and baby are doing great."

Last but not least, the winner of Life After Love Island, Fincham told that he is now a proud dad to a healthy baby girl, Blossom, and illustrated his birth details. Recently, he posted a picture holding his little girl's tiny hands via Instagram on 26th January 2020.

Before the arrival of Blossom, Jack was in an intimate relationship with his reality show co-partner and ex-girlfriend, Dani Dyer in 2018. But, he is now dating a London-based hairstylist, Laura Anderson since August 2020.