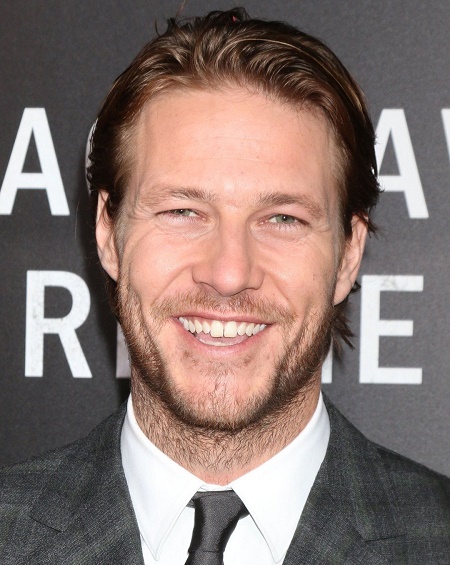 Luke Bracey is an Australian actor who made his first acting debut as recurring role Trey Palmer in Aussie soap opera, Home and Away (1988) in 2009. In addition, he is famous for his movie roles including Cobra Commander in G.I. Joe: Retaliation (2013), as Riley in Monte Carlo (2011), and as Smitty Ryker in Hacksaw Ridge (2016).

He was born on 26 April 1989 in Sydney, Australia. As per his citizenship, he is Australian and is of white ethnicity. For his education, he graduated in 2007 from Scots College which is located in Sydney. Further, there is no information regarding his family background to the media.

Is Luke Bracey Dating Anyone Currently?

No, the handsome actor, Bracey who is 31 years now seems to be a single man. So far, he has no wife until now. However, he was previously in a short term love relationship with Mexican actress and singer, Eiza Gonzalez, 30, in 2019.

Their romance rumors became public on Friday 8 November 2019 when they were spotted kissing in Los Angeles. Then again, during their Saturday trip to Tulum, Mexico, the Point Break star and the Hobbs & Shaw star were seen packing on the PDA.

Before that, the two also attended the Ralph Lauren fashion show together in NYC in month September. But their news about breaking up came out after a few months of recent love romance.

How Much Net Worth Does Luke Bracey Have?

The Australian actor, Luke Bracey has accumulated the colossal estimated net worth of $3 Million as of early June 2020. The primary income source of her earnings is her acting career as she has landed in significant roles in movies and TV series to date.

Likewise, the hard-working actor earns a salary of $600,000 a year from acting in various films and TV shows. In 2013, he performed in the action film Military Science Fiction G.I. Joe: Retaliation, which raised more than $378 million worldwide against a $130–155 million budget.

Career As A Actor

Bracey started his acting career in 2009 with the Australian soap opera Home and Away, broadcast on Seven Network. He played the character Trey Palmer, introduced on 9 February 2009 to the audience. Since then, he has also appeared on several TV shows such as Dance Academy, Westside, and Little Fires Everywhere.

Apart from the TV shows, Luke also has made various characters in movies as well as. He made his first film debut by appearing in 2011's film Monte Carlo as Riley, where singer Selena Gomez also starred.

For More Information Related To Your Favorite Celebs, Stay Connected To Marriedceleb !!!