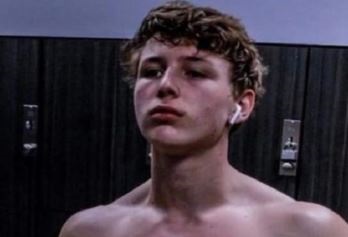 Today we are listing one of the popular names in the show business who has successfully ranked his name worldwide through his father's name; he is none other than Luke Lesnar. Luke is the son of the famous wrestler Brock Lesnar, each and every fan is still wondering whether Luke is following his father's footsteps or not.

Luke is the eldest son of the Brock and is possibly walking in his father's footsteps. Being a son of one of the successful wrestlers he might have some pressure regarding being a wrestler but 17 years old, Luke hasn't officially confirmed regarding joining into WWE yet. He has been recently highlighted because some buff dude, Bryce Winkelman used his name and opened an Instagram account. However, WWE later confirmed that the account did not belong to Brock's son.

Born in the United States on April 10, 2002, Luke has been keeping his personal life very much private. It might be because of the whole media attraction through to him due to his father's fame.

The young and handsome Lesner's son is currently single and hasn't been seen with anyone in public places. Maybe he is currently deeply focused on his career and has planned to receive more amount of fame than his father. Who knows?

Luke's parents are never married in their life but have been in a relationship for almost one decade. Her mother Nicole McClain is a fitness model while father Brock Lesnar is one of the famous wrestlers in the world.

The pair were known to walk in separate paths around 2003. From that day onwards Luke is living with his single mom happily. His father is still supporting him and his mother in every possible manner.

Who is Luke's father, Brock Lesner?

He has been currently signed to WWE and is WWE Champion in his fifth reign. He debuted at the age of 25 into WWE which lead him to become the youngest champion in the title's history.

During his time in Mixed martial arts, he played 8 matches from which he won 5 of them while he losses 3 of them. Furthermore, he is popularly known as the title of Here Comes the Pain due to his massive physic and sensational playing style. In October 2007, he played for the UFC where he gained the UFC Heavyweight Championship in Nov. 2008.

After lots of ups and downs in his career, he finally returns to WWE in 2012 and on the 6th of April, 2014 he broke the Undertaker's previously-undefeated WrestleMania streak. The 6 feet and the 2-inch tall beast is still in his height of career and has been cracking bones of some of the renowned wrestler.

Brock met Sable (Rena Greek) back in 2004 at that time both of them were happily engaged in their professional career and were very distracted with their personal life and relationship. Brock was recently separated from Nicole while Greek was almost getting divorced from her husband.

After dating for almost a year, the pair decided to get engaged in January 2006 and later exchanged the wedding vows back on 6th May, 2006. From that day onwards, the rest is history. Their love story has been a huge trademark to every WWE players and fans because both are seen supporting each other in their day to day life and as well as in their professional life.

Luke's father and stepmother are now married for 13 straight years. The pair are often seen together in every public place kissing and hugging for no reason, from which we can see their deep emotions to one another.

The couple welcomed their first son, Turk Lesnar back in 2009 and within a year, they were blessed with another son named Duke Lesnar. The family of four is living a very lavish lifestyle without a doubt and is often seen vacating together in their free time.

Does Luke have a Twin Sister?

Like his father, Luke is also very professional in keeping his personal life very private. Many sources have revealed that he has his twin sister named Mya Lynn Lesnar, however, no one has ever confirmed about her and mention her in any media.

Regarding Mya, she seems to be as athletic as her family background because some of the sources have revealed that she loves to play volleyball. Furthermore, Mya was born in April 2002 and is the daughter of Nicole and Brock without a doubt.

The Net Worth of Luke's Father, Brock Lesnar

Brock Lesnar has a net worth of $28 Million, he accumulated all of his wealth through his outstanding career. Currently, he is WWE Champion despite working fewer than 25 events per year and only a handful of those involve any actual wrestling.

Yet the beast of WWE is a major draw and arguably the WWE roster's most entertaining performer of all time and has bagged $6 Million this year while John Cena has bagged $9.5 Million which makes him WWE's Highest-paid Wrestler.

According to Sport Bible, he holds $12 Million as his base salaries which makes him one of the highest-earning wrestlers in the WWE. Additionally in 2016, Brock alone earned $5.5 Million wrestling in the WWE and $6.5 Million fighting in the UFC for a total take of $12 Million. Other WWE players like Bailey Wrestler is $200,000 as annual remuneration.

Having a wonderful career, Brock has also been engaged in many legal issues. In January 2001, he was arrested by the police for suspicion of possessing large amounts of anabolic steroids. Later all the charges were dropped when it was confirmed that the substances were a legal growth hormone.

On December 15, 2011, he was charged with hunting infractions on a trip to Alberta and pleaded guilty which lead him to get charged of $1,725 fine and a six-month hunting suspension.

Furthermore in 2016, he was hit by a quarter-million-dollar fine and a 12 months suspension after he was found positive of using performance enhancement drugs in his MMA battle with Mark Hunt; however, he won that match. Later NSAC Executive Director Bob Bennett stated to MMA Weekly Ken Pishna that he still has to pay his fine; on that note, Brock was unable to compete in Las Vegas.