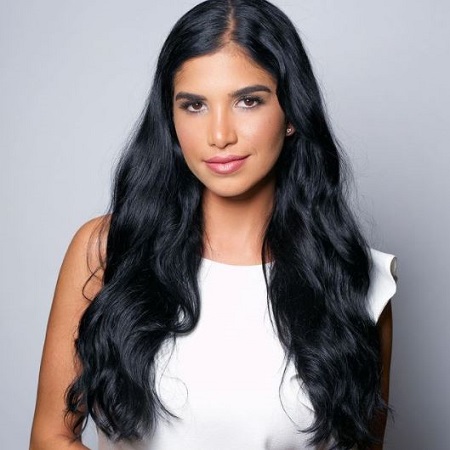 Madison Gesiotto is an American famous attorney, TV commentator, columnist, model, and beauty queen. She came to highlight after winning the tittle of Miss Ohio USA 2014 after completing Miss USA 2014.

Now she works as a journalist for The Washington Times. Also, she is a frequent contributor to Fox News and Fox Business Program. Today let's find out some interesting facts about her in the following sections.

Yes, the beautiful beauty pageant contestant Madison has not tied the knot with anyone. But she has been living a blissful love relationship with her future husband, Marcus Gilbert.

However, Gesiotto and her fiancee Gilbert have not revealed how they first met and when they started dating. After dating for a year, they finally became engaged on July 10 2020. She announced her big day news through her IG post posting the purposing videos of two.

She captioned: "WE’RE ENGAGED".  I am so honored, blessed and excited to become Mrs. Gilbert! I love you @marcusgilbert". The NFL player got down on his knee with a beautiful engagement ring and popped up the big question.

More to that, the duo frequently keeps posting each other pictures on their Instagram post with heart touching captions. Recently on October 25, she posted the photo of herself carrying the frame which reads: "I said YES to the dress(es). Any guesses?!".

It seems the couple are planning to get married soon. And they have an amazing relationship. Before dating Marcus, she was once linked to the American football player, Nick Bosa, 23 in 2018.

Who is Marcus Gilbert?

Born on February 15, 1988, Marcus is an American football offensive tackle who plays for the Arizona Cardinals of the National Football League (NFL) since 2019. From 2011 until 2018, he played football for professional American football team Pittsburgh Steelers based in Pittsburgh.

The 6 ft 6 in tall Gilbert also played high school football for St. Thomas Aquinas and college football for the University of Florida. He moreover is a former member of BCS National Championship team. In 2011, he was drafted by the Pittsburgh Steelers in the round 2 of the NFL Draft.

Net Worth Of Madison Gesiotto

A Pennsylvania native, Madison Gesiotto has an estimated net worth of $1 Million. She has accumulated her fortune throughout her career as a journalist, model, writer and conservative commentator. Similatly, Miss USA 2007, Rachel Smith has a worth of around $500,000.

She placed the third runner-up at the Miss Ohio USA pageant in 2012 representing Columbus. After a year, she crowned Miss Ohio USA 2014 on Nov. 9. Then, she got an opportunity for working on various TV news outlets including NBC4i, FOX28, and Fox 8 News.

Now, she works as a weekly contributor at The Washington Times titled Millennial Mindset. Also, she is Co-Chair of Women for 45th U.S. President, Trump.

Gesiotto was born on March 20, 1992, in  Pittsburgh, Pennsylvania, United States. She is the daughter of James Gesiotto, (father) and Sherri Gesiotto (mother). She has two siblings a sister Alessandra Gesiotto and a brother Jimmy Gesiotto.

She studied at Jackson High School and trained at the Winterhurst Figure Skating Club as a competitive figure skater. In 2014, she graduated from Ohio State University with a Bachelor of Arts in Political Science.

Later, she completes her graduation from Moritz College at the Ohio State of Law with a Juris Doctorate degree in 2017. So far, she holds an American nationality and is of mixed ethnicity.