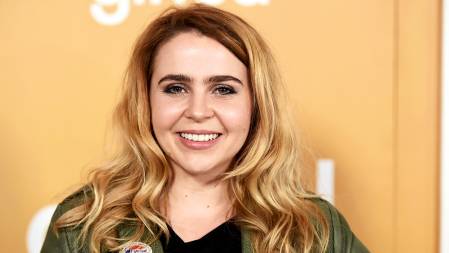 Mae Whitman is a famous American Actress known for portraying the role of Casey Green in 1994 movie When A Man Loves a Woman. In addition, she is a well-known singer. She started her career as a child actress and, as of now, features as a lead actress in movies.

Mae Whitman was born as Mae Margaret Whitman on June 9, 1988. She is the only child born to Jeff Whitman and his wife, Patricia Anne Musick. He father worked as a personal manager and set construction coordinator, and her mother is American Voice Actress. Mae belongs to half English and half-German by her ancestry.

The Internet is a powerful tool to know Information. Following information available on the Internet, It seems like, Mae is in relationship with Miles Heizer. None of them have confirmed about the relationship.

However, This is not her first unofficial relationship. She has been involved in some famous relationship before this. Her relationship history starts from a long time ago.

It is rumored to date that, Mae Whitman dated Haley Joel Osment back in 2002. The exact Information about this relationship has not been disclosed by both of them. After this rumored relationship, She was in a formal relationship with Landon Pigg.

The exact of their relationship is still a topic of debate in the media. Landon is a renowned, American Actor and a songwriter. The two of them dated for some time and ended up failing to keep the promises made before.

After this heartbreak, Mae was in a relationship with Dov Tiefenbach. The love birds dated each other from 2008. Similar to he previous relations, This also ended up soon. The exact date of their split is not available to the media.

Then, after the breakup, Mae is supposed to have dated her co-star, Peter Krause. The two have not spoken a single word to date about their relationship. As they were working for the same show, they could be found spending a lot of time together in the set.

Net Worth and Salary of Mae Whitman

Mae Whitman has a net worth of $1 Million as per celebritynetworth. She credits most of her net worth to the successful career of working in the American Television and Film Industry. Mae started earning At three years old after doing a voice-over in a Tyson Chicken commercial. She and Reno Wilson appears together on NBC good Girls where Izzy Stannard, a newcomer also appeared.

Mae Whiteman looks back at her "Independence Day" Audition

Mae has been regular with TV Series, Parenthood, as Amber Holt since 2010. The average salary of a Actress in the United States is more than $60,000. Mae has won three Young Artist Awards for her Two shows and Won San Diego Film Critics Society in 2012.