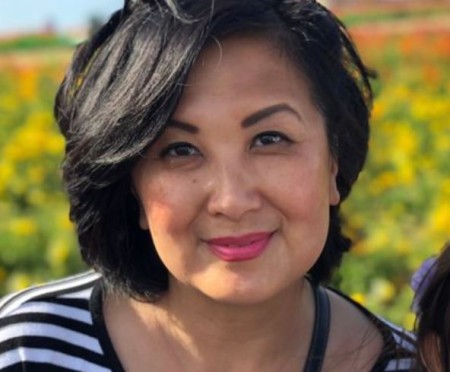 Facts of Mai Do Burrous

Body and Relation Status of Mai Do Burrous

Mai Do-Burrous found herself in a tragedy when her husband, Chris Burrous, was found dead on December 27, 2018. Chris, a longtime news anchor at KTLA-5, died due to complications after using drugs. Stay with us to know the full story.

While Mai is also is a television personality, she became a household name only after marrying her late husband. The couple had one daughter named Isabella.

The couple first met at KGET-TV in Bakersfield in 1999. At the time, Mai worked as a producer and reporter for the 17 News team. Meanwhile, Chris joined the station as a morning news anchor.

The couple married after four years of relationship. Their wedding ceremony took place on October 19, 2003, in Bakersfield, California.

Mai and Chris had only one daughter, Isabella Burrous born in July 2009. Isabella, who is 11 years now, was once spotted with Liberte Chan, showing her martial arts belt.

Two months before his death, Chris wished his wife a sweet anniversary message. On October 19, 2018, he wrote via Twitter: "Enjoying our 15th. Anniversary. She’s the yin to my yang. Thank goodness. Married in Bakersfield, and next day our Asian reception at 888 in San Gabriel. I hope you have a good night."

There is no exact information available about Mai's net worth and earnings. However, her late husband, Chris, had a net worth of $1 million at the time of his death. Well, the family had a decent lifestyle.

At present, Mai is living with her daughter. She rarely speaks about her personal life. Therefore, the details about her current profession are not available.

Who was Chris Burrous?

Chris, a reputed American journalist, was born on January 11, 1975, in Santa Clara County, California. His mother was a Nasa engineer, while his father was a farmer. Chris earned his broadcast journalism degree from Chapman University.

Prior to joining KTLA in 2011, Chris worked for KGET-TV, WPIX, KMAX, and KFBK-TV. He had over a decade of working experience in the journalism field.

Chris Burrous' cause of death

On December 27, 2018, Chris went to a motel in Glendale, Calfornia leaving early from work. He then engaged in sexual activities with a male partner. While they were geting hyped up, Chris reportedly inserted a meth stone inside his rectum twice.

How did Chris Burrous die?

Afterward, Burrous began feeling discomfort and passed out. His partner called the 911, but the anchor died on the way to the hospital.

On February 22, 2019, the LA County medical examiner revealed Chris' death due to drug overdose. The autopsy reports confirmed his death due to methamphetamine toxicity.

Chris' Big Secret: Was he Bisexual?

Although married for fifteen years, Chris had hidden a big secret from his wife and the public. After his death, it was discovered that Burrous used to engage in homosexual activities.

As mentioned, Chris was found in a motel room, but he was not alone. Chris was waiting for a man he met on Grindr (a dating app). The two had twice met before. Hence, the public and Chris' family later knew that he was a bisexual.

The funeral of Chris Burrous took place on January 11, 2019. He was buried at Rose Hills Cemetery in Whittier, California. Further, two GoFundMe accounts were set up for the deceased anchorman.

One account with a goal of $50,000 was opened by Mai's sister, Rosemarie Do Silverstein. The other account was opened by Gigi Graciette, a newscaster in Los Angeles, with the aim of $75,000.

Mai's Escape from the Vietnam War

Mai Do-Burrous was born in 1973 in Vietnam during the time of the Vietnam War. When she was two, the conflict was eventually over. Mai lived with her mother in Saigon, while her father was already in the United States as a doctoral student.

As per the documentary, Mai Do-Burrous: Escape From Vietnam, Mai and her mother boarded on a plane with two US Marines. Mai reunited with her father, Sang Do, and the family settled in Cleveland, Ohio. Mai became an American citizen, and she grew up to be a reporter.