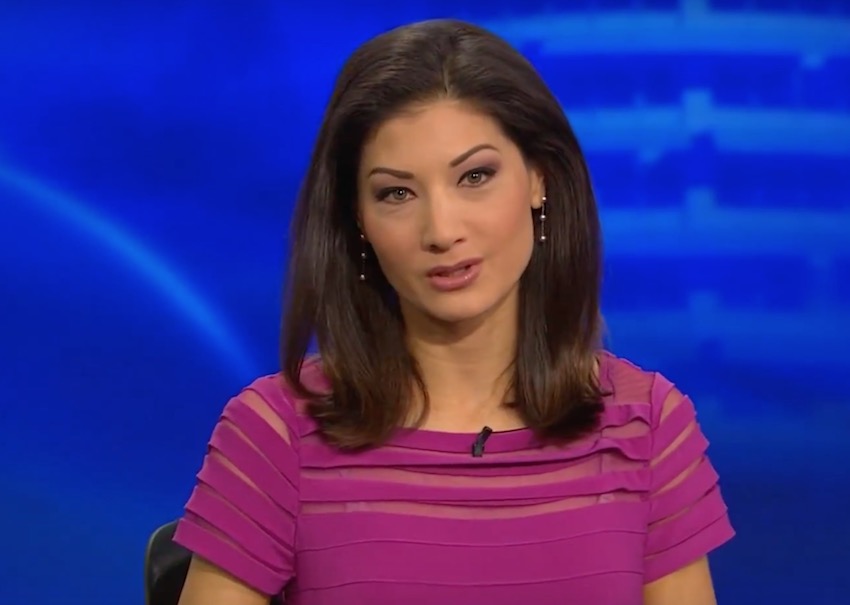 Just like Ginger Chan, Liberte Chan is one of the most popular TV celebrity. Ginger and Liberte don't only share the last name but also share a similar career pathway. Liberte Chan is a famous meteorologist, journalist, and weather reporter forthe KTLA 5, CW affiliated TV station.

These were some of her professional work indications. But, what about her personal life. Is Chan a married woman or she is living a single life?

Liberte was born to Tom Chan  (father) and his wife. But the information regarding her parents still lacks. She celebrates her birth on July 16 of every year. Liberte has two siblings. Her elder brother's name is Cory Chan with whom Liberte shares pictures on her social media accounts.

Chan's father Tom is Caucasian and her mother is of a Chinese ethnic group. Concerning education, Liberte graduated from Marlborough School. Later she earned a Bachelor of Arts in Journalism in 2001 from the University of Massachusetts.

How and when Chan and Strohmeier met one another is unclear. But it seems like the duo dated several months before they got engaged in October 2020.

Luis proposed with a diamond ring at his private jet. They were heading towards Mexico to spend their vacation. The couple revealed the news of their engagement via social media posts. As of now, the newly engaged pair is living merrily. They spend their time together and also never misses a chance to flaunt romantic pictures.

Chan was a married woman. She was previously in a marital relationship with her longtime partner, Brian Chase, an American actor in 2012.  Chan and Chase tied the wedding knot at the Greystone Mansion's garden.

Brian and Liberte were living merrily as a beautiful married pair. Everything was going fine. However, the former married partner separated. The reason behind their separation still lacks. Furthermore, Chan and Chase did not share any kids from their marital bond.

Similarly, Luis was also a married man. He was married to Gretchen Strohmeier until he died of breast cancer in 2010. From the former marital relationship, he shared three children, a daughter, Alicia Kristina Strohmeier, and sons, Alex Strohmeier, Andrew Michaels Strohmeier.

Liberte was also in a romantic relationship with American personal trainer Brett Hoebel. Brett has also made his appearance in the NBC reality series The Biggest Loser: Couples 4.

Chan began her career as a News Writer at KTLA in 2003, where she remained for three-year. After that, she worked at KCOY/KKFX as a General Assignment Reporter for two-year from 2006 to 2008.

Chan joined KMIR 6 News as a morning anchor, a reporter in 2008. Moreover, Liberte currently works as a reporter at KTLA. She joined the company in August 2010. Similarly,Cher Calvinwas also the famous news reporter of KTLA.

Besides, working as an anchor, many of her fans believe that Liberte Chan has her clothing line. However, the news is not accurate as she is just devoted to her work. Chan is On Air alongside Ryan Seacrest as the co-host.

Liberte is inspired to become a life blogger from her job weathercaster, which she does as a piece of her daily routine. She usually posts her pictures of swimsuit, yoga costume on social sites.

Chan earns around $500,000 as an annual salary. However, as per the Payscale, the average salary of a meteorologist is around $53,671. As Liberte has spent a long time in the journalism field, she must have earned more than the average.

Similarly, Chan's net worth is around $3 million, which is like the net worth of an American reporter Nicolle Wallace and Cher Calvin.

Chan maintained a slim body with a balanced bodyweight and has brown color eyes, and her hair is also brown. She is 5 feet 5 inches (165 cm) tall and weighs around 50 kg.

Do visit Married Celeb for more interesting Biographies and Gossips on Meteorologists!!!