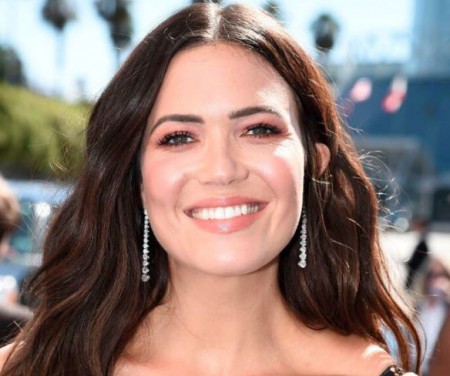 Nothing can stop us if we dare to follow our dreams. We can excel in any field by regular practice, persistence, and determination. And the 35-year-old, Mandy Moore falls under this category. She is an American singer-songwriter and actress who came to fame with her debut single "Candy."

Who is Mandy Moore?

The beautiful singer-songwriter and actress, Miss Mandy Moore is a Golden Globe Award and Primetime Emmy Award-nominated actress. Additionally, she has won two Screen Actors Guild Awards. Likewise, in 2019 she received a star on the Hollywood Walk of Fame.

Mandy was born as Amanda Leigh Moore on April 10, 1984, in Nashua, New Hampshire, U.S. She was born to Stacy (mother), a former news reporter and Donald Moore, a pilot for American Airlines.

Mandy has an older brother named Scott and a younger brother named Kyle. She is of Russian-Jewish, English, Scottish, and Irish descent. From an early age, she became interested in singing and acting. At 12, she went to the Stagedoor Manor performing arts camp.

Besides singing, Moore has also appeared in few movies such as The Princess Diaries, A Walk to Remember, How to Deal, 47 Meters Down, Ralph Breaks the Internet, etc.

Talking about Mandy's relationship status, she is currently living a blissful married life. She has been married twice to date. However, she doesn't have children. Moore is a fun-loving girl and loves to do outdoor activities. In 2019, she and her friends reached the Everest base camps.

As mentioned, Moore has been married twice. She is currently married to Taylor Goldsmith, the frontman of the American folk-rock band, 'Dawes.' The couple began dating back in 2015 and became engaged in September 2017.

Further, they married in a private wedding ceremony on November 18, 2018, in Los Angeles, California. The couple might be planning to have a child.

About Moore's past relationship, she dated Scrubs star Zach Braff from 2004 to 2006. In 2008, she began dating former Whiskeytown frontman, Ryan Adams. They got engaged in February 2009 and married on March 10, 2009, in Savannah, Georgia.

Sadly, in January 2015, Moore filed for divorce from Adams while he was in New York. Later, in 2019, she revealed that he used to be emotionally abusive.

As of 2019, the Candy singer, Mandy Moore has a stunning net worth of $10 million. The primary source of her income comes through her singing and acting career. Besides, she has amassed an impressive net worth throughout her career. Actress like Nia Renee Hill and Brittany Curran also has a decent net worth.

She has appeared in some of the hit tv shows and blockbuster movies. Here take a look at some of her films box-office collections:

In 2017 Mandy purchased the single-storey home in Pasadena for $2.56 million. The 3,551-square-foot house is located at the top of a cul-de-sac in the Linda Vista area.

In October 2016, Moore sold her Los Feliz home for $2.95 million. She once shared that home with ex-husband, Ryan Adams. The singer purchased the 4,747-square-foot home back in 2002 for $1.725 million. Likewise, she owns expensive cars such as the Porsche 911 Carrera S and a Toyota Prius.

The lovely actress and singer appears in commercials and can be seen promoting cosmetics brands. Further, in 2005, she started her own fashion line, 'Mblem.' Although the line only lasted three years, Moore was happy with the run and hoped to have more experience in the future in the fashion business.