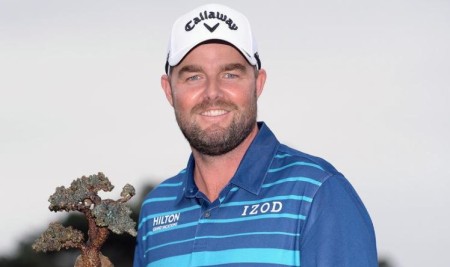 Marc Leishman is an Australian professional golfer who is currently ranked 28 in the Official World Golf Rankings. Marc plays on the PGA Tour and is the first Australian to win the Rookie of the Year award in 2009.

Leishman won the Farmers Insurance Open in January 2020, where Jon Rahm became the runner up and Rory McIlroy finished in the third position. Likewise, some of Marc's best performances include the Nedbank Golf Challenge (2015), BMW Championship (2017), CIMB Classic (2018).

The 37-year-old, Marc Leishman is married to his wife, Audrey Hills. After dating for three years, Marc and Audrey exchanged their wedding vows on April 23, 2010. Further, their marriage ceremony took place at a church in Virginia, which is Audrey's hometown.

As we know, Marc is Australian, but his wife is an American citizen. So, how did they meet? It was around 2007 when Leishman first met Audrey. At the time, the 22-year-old golfer was in the states for a tournament. One day Marc went to a bar in Williamsburg, Virginia, and ran into his future spouse.

There weren’t many people in the bar. It wasn’t a great bar…I lived out of hotels. I’d be in a Motel 6 or a Super 8. You spend as little as possible. If you miss the qualifier if it was a good town you’d stay there. If it was not a great town, you’d go to the next one and look for the party scene. I stayed there because of that first date.

As of January 2021, Marc and Audrey have been married for over ten years. On the occasion of their tenth anniversary, Audrey shared a picture of their wedding day.

The golfer shares three adorable children with his wife. Their first two children are boys, while the third is a girl. Marc and Audrey welcomed Harvey Leishman in January 2012. Their second son, Ollie Ray Leishman was born in August 2013.

Further, their third child, daughter,  Eva Florence Leishman was born on July 7, 2017. Neither Marc nor Audrey expect to be able to have children because of Audrey’s health. Hence, the couple has given their daughter a sweet nickname "miracle baby."

Back in 2015, when Marc was practicing for the Masters, his wife suffered from sepsis and ended up in the hospital. Audrey suffered a toxic-shock syndrome which is a rare, life-threatening complication of certain bacterial infections. Further, she was put into a coma for four days.

The doctors gave a 5% chance of recovery and were unable to say how much longer Audrey would live. However, they saved her life after much struggle. Today, she still suffers from a weakened immune system, but Audrey is thankful and happy to be with her family. Moreover, she raises awareness about sepsis as well.

Now, let's break down Leishman's earnings for the past five years.

Besides the prize money, Leishman earns a substantial amount of money from endorsements. Some of his sponsors are Callaway Golf, Izod, Cativa CBD, National Arbitration and Mediation (NAM), etc. Additionally, Marc has merchandise where he sells his own brand beer and apparel.

Marc grew up playing cricket, footy, and golf and he has also played on the Korean Tour. Leishman had a successful career in Australia as a junior golfer. At 13, he won the Warrnambool Club Championship.