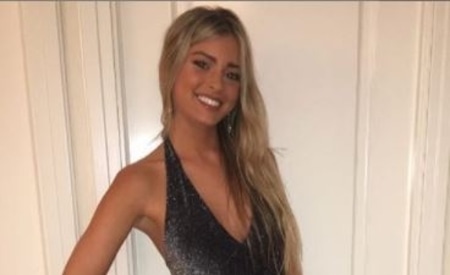 Marina Muntaner is a Spanish Instagram star, who is known for posting a variety of sexy swimwear and street war pictures on her social media. Her popularity increased when she started dating a Spanish professional footballer, Marco Asensio, who is the winger and attacking midfielder for Real Madrid.

The Instagram star, Marina, was born on 14 February 1993, in Spain, under the birth sign, Aquarius. Similarly, she holds a Spanish nationality and belongs to Spaniard's ethnicity. If you are curious to know about her personal life, then keep reading the article until the end.

In A Relationship With Marco Asensio

Marina is currently in a relationship with the famous Spanish professional Footballer, Marco Asensio. Now, he plays from the Real Madrid team as a winger and attacking midfielder. However, she has been very secretive concerning their relation as she often ignores questions and things related to her personal life in interviews and public contacts.

It is reported that she dated Asensio in between 2016 and 2017. They broke up after being in a relationship for a couple of months. After the break-up, the ex-couple has gathered further fame and fortune as she has collected an army of followers whereas Asensio has scored four goals that season and one against the rival team, Barcelona.

Before being in a relationship with Asensio, the 27-years-old model, Marina, was dating Marc teammate, Ximo Navarro. But after encountering Asensio, she left him and started a relationship with him. Similarly, she was often seen cheering him and supporting him while they were still together.

Besides these two known relationships, she is not seen with any other men as of now. Further, she has been keeping herself away from unwanted rumors and controversies concerning her love life.

Marina's net worth is estimated at around $2 Million as of 2020 which is similar to Lala Kent. She collects this hefty amount of money from her successful career as an Instagram star. Currently, she has over 99,700 followers on her Instagram account, and she has signed a promotional contract with different swimwear brands and street wears.

Furthermore, she is also a DJ and often went on clubs to perform. So, she might be adding a decent amount of dollars from it as well. Apart from her earnings, her boyfriend, Marco's fortune, is around $35 Million as of 2020, which he earns through his career as a professional footballer.

Without a doubt, she is living a lavish lifestyle along with her earnings.

From Modeling To DJing

Well, Marina started posting modeling content on her Instagram from February 2016. Since then, she often posts pictures in a variety of swimwear, streetwear from different locations throughout Spain, Dubai, and India. Currently, she does modeling jobs for BALR, which was founded in 2013.

Furthermore, she is also a finalist of the Miss Balearics pageant. Not only a model, but she is also a lady DJ with a stage name INNA MB. She often has seen Djing at different cafes and bars such as Cafe Milan in Spain. Other Spanish models are Carla Alapont.