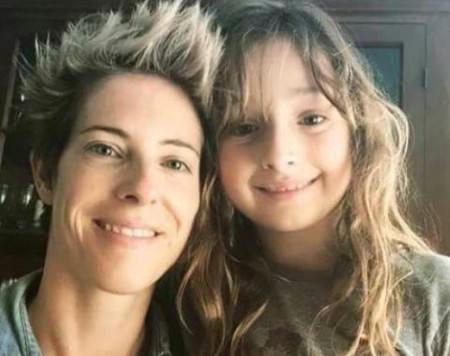 Like most celebrity kids who are known for their parents, Matilda Clutterbuck is known as Andrew Lincoln's daughter. Her father is an English actor whose first major role was in the BBC drama This Life. He gained international fame after portraying the lead role of Rick Grimes in The Walking Dead.

Matilda was born around 2007 and she is 13 years old as of 2020. She was born in London, England and belongs to English nationality. Matilda has a younger brother named, Arthur. Further, their mother's name is Gael Anderson.

Matilda's parents, Andrew and Gael has been married since June 10, 2006. The couple first met on the sets of Channel 4 sitcom, Teachers in the early 2000s. As of now, they have been together for the past 14 years.

Andrew and his wife are cautious about paparazzi and they try to keep their children far from media and public attention. Therefore, the family is occasionally seen together.

The 47-year-old, Andrew Lincoln, an English actor was born on September 14, 1973, in London England. His real name is Andrew James Clutterbuck. Lincoln has appeared in television series such as Teachers, Love Actually, and Afterlife.

Lincoln's major role came out as Rick Grimes in the hit AMC post-apocalyptic horror tv series, The Walking Dead. For his portrayal, he won the Saturn Award for Best Actor in 2015 and 2017. Further, he is set to reprise his role in the upcoming trilogy.

Unlike her husband, Gael Anderson is not a popular name, but she belongs to a renown family. She is the daughter of musician, singer, and songwriter, Ian Anderson.

Gael has a brother named, James Duncan, also a musician and their mother's name is Shona Learoyd. Not much is known about Gael, but she used to work in the television industry as the showrunner as per sources. Further, Anderson has worked in many films and television shows as a crew member.

The older child of Andrew is too young to be involved in any professional activities. Hence, she and her younger brother enjoy their parents' net worth. As of 2020, Andrew Lincoln has a net worth of $16 million, which he collected from his acting endeavors.

For starring in The Walking Dead, Lincoln charged $650,000 per episode, making him one of the highest-paid television actors. On the same series, actors such as Norman Reedus, Jon Bernthal, Alanna Masterson, Jeffrey DeMunn, Melissa McBride, etc., also earned a hefty sum of money.