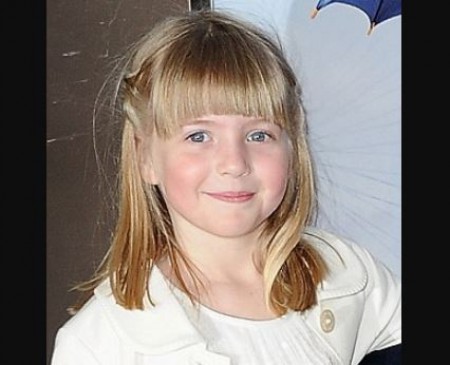 Who is Matilda Martha Thykier?

It is a fact that children who have famous parents get constant attention and spotlight. Being a celebrity child is also an overwhelming experience. And today we are going to talk about, Matilda Martha Thykier. So, who exactly is Matilda and for what she is famous? Have you heard of Claudia Winkleman? She is a popular British television presenter and media personality and one of the highest-paid female presenter with a stunning net worth of $12 million.

Matilda was born as Matilda Martha Thykier on June 5, 2006, in Westminster, London to mother Claudia and father, Kris Thykier. As of 2019, she is 14 years old, and her birth sign is Gemini. She has an older brother named Jake Thykier (16) and a younger brother named, Arthur Thykier (8).

Matilda's parents rarely share anything about their children; hence, there is not much information. But, She probably is studying in a high school. Her brother Jake currently studies in Wetherby Preparatory School, an Independent school in England.

Do you know? At the age of eight, Matilda played a bridesmaid in the 2013 film I Give It a Year with another child actor, Minnie Driver.

Matilda Thykier is an English celebrity child. Her mother, Claudia, is best known for hosting the BBC Two's, 'Strictly Come Dancing: It Takes two.' She presented Strictly Come Dancing between 2004 and 2010. Since 2014, Winkelman has been a main co-host on Saturday night live shows.

Further, her father Kris Thykier used to work as a public relations expert. Also, he served at Freud Communications working in public relations. Later, Kris left his old job to become a film producer. Additionally, he is the founder of London based PeaPie films.

On October 31, 2014, then eight-year-old, Matilda was taken to hospital after being seriously injured when her Halloween costume caught fire. She was left with severe burns. As per her mother, Matilda's dress caught alight on a candle while trick or treating. Matilda burnt her leg and stayed for a  week in the hospital.

Talking to BBC, Claudia recounted the incident as horrific Halloween accident and explained:

"I bought her costume from the supermarket, she wanted to go as a witch. She had a witches hat, and a cape, and I was just talking to somebody, and then I heard her scream. And she just screamed 'mummy,' and I turned around, and that was that she was just on fire.”

Following this incident, the government proposed a law to tighten the flame retardant standards of Halloween costumes. During the time of Matilda's treatment, Kris and Claudia released a statement thanking well-wishers, NHS doctors, nurses, and staff.

Winkleman became the highest-paid female presenter in 2016/17 and 2017/18, with her earnings somewhere between $550,000-$600,000 per year. Winkleman began her journalism career as a travel writer and wrote for The Sunday Times, The Independent and Metro. Apart from her BBC earnings, Winkleman also earns about $91,853 for her column in the magazine Sunday Times Style.

Also, Claudia and her husband bought a  $3.97 million townhouse in 2006 near Marble Arch, in Westminster.