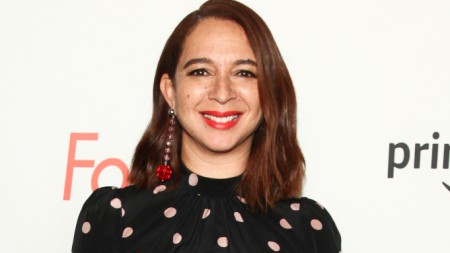 In Hollywood, Maya Rudolph is one of the prominent names among female celebrities. The 47-year-old American actress made a fortune by working as a voice artist, comedian, and singer. She first gained recognition in the mid-1990s as a member of the rock band The Rentals. Maya later joined an improvisational and comedy sketch troupe called, The Groundlings.

Rudolph also appeared in Saturday Night Live for seven consecutive years leaving the show in 2007. Maya has been dating Paul Thomas Anderson since 2001 and the couple has four children altogether.

Maya Calls Paul Her Husband Although They Aren't Married

The actress and comedian have been in a long term relationship with filmmaker Paul Thomas Anderson. The couple has been dating since 2001 and is still together as of 2019. Therefore, Maya and Paul have spent almost eighteen years of togetherness.

Despite dating since 2001, the couple never officially exchanged their wedding vows. However, Maya refers to Paul as her husband and he calls her wife. After eight years of referring to Anderson as her boyfriend, Maya decided to call him as her husband once they had their first daughter in 2009.

Further, Maya hasn't revealed if they will even tie the knot in the coming future. However, the lovebirds seem to have found contentment in their lives as an old-time couple.

How Maya and Paul first met?

Maya and Paul met during a Saturday Night Live rehearsal for the February 19, 2000 show where she was the musical guest. It was here where Rudolph met Anderson for the first time.

Maya and Paul kept their relationship very low-profile. For your information, Paul made a movie in 2017 named Phantom Thread inspired by a particular moment in his own long-term relationship. It was then when the news came as a surprise to many people as their relationship was so clandestine.

The 49-year-old, Paul Thomas Anderson is an American director whose films have been nominated for 25 Academy Awards.

He first achieved critical and commercial success with the 1997 movie Boogie Nights which was set during the Golden Age of Pornography.

He is often called one of the most exciting and supreme talents of today. In 2007, the American Film Institute regarded him as one of the American film's modern masters.

Before deciding to stay together as longtime partners, both Maya and Paul had been engaged in past affairs. Maya dated actor, Chris Kattan for a short period in October 2001. At the time she was only friends with her future partner, Paul.

The nominee of two Primetime Emmy Award, Miss Maya Rudolph has a net worth of $10 million as of 2019. The primary source of her income comes from her profession as a comedian and actress.

Rudolph appeared on Saturday Night Live for seven years as a cast member from 2000-2007. Most of her movies are box-office hits including Grown-Ups, Bridemaids, Life of the Party, etc. Let's look at some of her highest-grossing movies:

On the other hand, Paul Thomas Anderson has a net worth of $70 million. He mainly earns from his career as a director, writer, and producer.

Rudolph joined the cast of Saturday Night Live in May 2000. Her final episode as a cast member was on November 3, 2007. Afterward, she occasionally appears on the show on a guest appearance.

In the 45th season premiere, she appeared as a Senator and presidential candidate Kamala Harris. She did a number of celebrity impressions on SNL including Beyonce, Halle Berry, Oprah Winfrey, etc.

Throughout her career, Rudolph has appeared in numerous films including, 50 First Dates, Grown Ups, We Don't Belong Here, Wine Country, etc. In 2017, she appeared in a comedy movie, Chips alongside Monica Padman. Apart from films, she also appears on television shows.