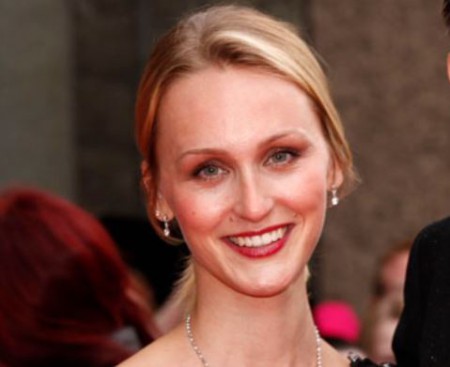 There are lots of individuals who come to limelight due to their relation with famous personalities. Among them, Megan Wallace Cunningham is one of the lovely wife of Craig Ferguson, Scottish-American television host, comedian, author, and actor.

Megan is a professional art dealer, but she is best known as the wife of Craig Ferguson. She was born in 1975 in Vermont, and as per sources, she belongs to a wealthy family. With Ferguson, Megan shares a son.

The 44-year-old art dealer is happily married to her husband, Craig Ferguson (57). The couple exchanged their wedding vows on December 21, 2008, in a private ceremony on Megan's family's farm in Chester, Vermont. It is said that only fifteen guests were invited to their wedding. Ferguson later announced his marriage in early 2009.

Megan and her spouse have been married for over a decade as of 2019. To date, they aren't involved in any personal disputes and are happy with each other's solidarity.

So, how they first met each other? Cuningham and Ferguson met in 2005. Despite thirteen years of the age gap, Craig managed to woo her, and after three years of relationships, the pair became husband and wife.

Past Affairs And Marriage

The details about Megan's past relationships and affairs is still a mystery. She has rarely spoken about her past love affairs, but currently, Megan s enjoying her married life with Craig.

On the other hand, Craig has married three times and is a twice-divorced man. His first wife was Anne Hogarth, with whom he lived in New York from 1983 to 1986. Further, his second marriage was to Sascha Corwin, who is the founder and proprietor of Los Angeles SpySchool.

The husband-wife duo, Megan, and Craig share one child, a son named Liam James, who was born on January 31, 2011. Liam is Megan's first child, whereas he is Craig's second child.

From his former wife, Sascha, Craig has one son, Milo. He and Sascha shared custody of Milo, and live near in the Hollywood Hills.

The 57-year-old, Craig Ferguson is a Scottish-American television host, comedian, author, and actor. He won two Daytime Emmy Awards for his game show Celebrity Name Game from 2014-2017. Among some renown late-night talk show host, Johnny Carson is one of them, along with other celebrities like Jimmy Kimmel, Jimmy Fallon, James Corden, etc.

YouTube: Craig Ferguson and his wife appeared together on Couple Thinkers!

In 2017, he released a web show called Couple Thinkers with his wife, Megan, and is available on YouTube. Further, he is known for hosting the CBS late-night talk show The Late Late Show with Craig Ferguson from 2005 to 2014.

As a professional art dealer, Megan Wallace has managed to collect a decent net worth of $1 million as of 2019. The earnings she makes from her profession depends upon the quality, size, and volume of the art pieces. As per some business sources, an average income of an art dealer ranges between $56,000-$200,000. Besides, Megan comes from a wealthy family, and she lives a lavish lifestyle with her spouse.

Meanwhile, Cunningham's husband, Craig Ferguson, has a net worth of $30 million as of 2019. Ferguson has been working in the entertainment industry for the past 39 years. The primary source of his massive wealth is his acting career. Also, he worked in television as a host for a long time. As per reports, Craig's annual salary is over $8 million.

Megan and her husband also own several luxury houses. In January 2019, Craig, along with his wife, listed their 6,800 sq-feet house in Los Angeles' Bronson Canyon for $6 million. The couple bought the luxury mansion for $4.1 million back in 2012.

They sold a Spanish-style home in Beachwood Canyon in mid-2013 for $1.75 million, and the following summer, they sold out a Cape Cod-style cottage in Malibu's Cove Colony for $5.95 million.

This article is about the gorgeous art dealer, Megan Wallace Cunningham. She is happily married to her husband, Craig Ferguson. To know about your favorite star, follow marriedceleb.