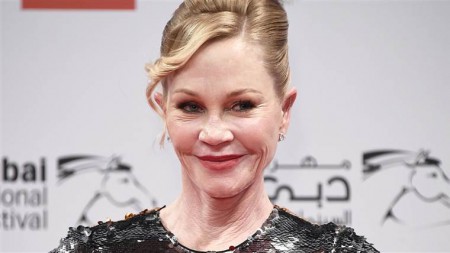 Among the crowd of successful actors, the 62-year-old Golden Globe Award winner, Melanie Griffith is one of the prominent actress. She gained mainstream success in the mid-1980s with movies like Body Double, Something Wild, Working Girl, etc.

With a career spanning almost fifty years, Griffith has built an impressive net worth. She and her third husband (now-ex), Antonio Banderas also had a massive real estate portfolio. Melanie has been married three times and has three children. Now, let's know about her personal life in detail.

When Melanie worked as an extra in the 1973 film The Harad Experiment, she was 14-year-old. On the set of the movie, she met actor Don Johnson who was then 22 years old. She began dating Johnson and lived together in a rented house.

On her 18th birthday, Melanie and Don became engaged and married on January 1976. Shockingly, their marriage lasted for only six months.

After divorce with Johnson, Melanie married for the second time with actor Steve Bauer in 1981. They met on the sets of a TV movie, She's in the Army Now. With Bauer, she gave birth to her first child, Alexander Griffith Bauer on August 22, 1985.

During this time, Griffith appeared on some successful mainstream movies like Roar, Body Double, Working Girl, etc. For the latter film, she won a Golden Globe Award for Best Actress in a Musical or Comedy.

Although her career reached the peak, she and Bauer separated in 1989 after eight years of marriage. They cited the reason for their separation as personal indifferences.

In 1989, Griffith reconnected with Johnson after completing rehabilitation. During that time, she had a problem with cocaine and liquor.

Further, Griffith and Johnson remarried again on June 26, 1989. The same year on October 4, she gave birth to a daughter Dakota Johnson. She is now an actress who is famous for appearing on 'Fifty Shades of Grey' franchise.

Griffith and Johnson had a very troublesome relation. They separated in March 1994 reconciling in the middle but eventually divorced in 1996.

After two unsuccessful marriage, Griffith found love for the third time. In 1996, she co-starred with Antonio Banderas in the comedy, Two Much. At the time, Melanie and Banderas both were on the verge of their divorce with each other spouses.

During the production of Two Much, Griffith and Banderas began a relationship and married the same year. They exchanged their wedding vows on May 14, 1996, in London.

Melanie gave birth to a daughter named Stella del Carmen Banderas on September 24, 1996. Stella is an actress known for Crazy in Alabama and The 61st Annual Golden Globe Awards.

When the star couple, Melanie and Antonio released a statement about their divorce in June 2014, fans were shocked. After nineteen years of the marital bond, they decided to split citing the reason as irreconcilable differences.

Despite being separated, the former couple is still on good terms. Banderas never misses any chance to praise Griffith's work, while she considers him a very good friend. She also has a tattoo of his first name on her right shoulder. Further, the two appeared in the 2014 science fiction film, Automata.

After three unsuccessful marriage, Melanie is now a single woman. The 62-year-old actress is busy on her small projects including small television roles including the recent comedy series, SMILF.

Melanie Griffith, an American actress, enjoys a net worth of $40 million. Throughout her career, Griffith as an actress and film producer managed to build a stupendous fortune. The Golden Globe winner, Melanie also stacks income from her real estates.

Being active in the film industry for fifty years, there is no doubt that Melanie's net worth is staggering. Her salary was $1 million in the 1990's Bonfire at the Vanities and $2 million in the 1994's Milk Money.

Aside from her love in real estates, Griffith seems to have a soft spot for luxury vehicles. She owns several luxury cars including Bentley Continental GT V8 Convertible and Porsche.

Griffith who had luxurious bivouac in an expensive rental in L.A's Outpost Estates purchased a Spanish Villa just above L.A's Sunset Strip for $3.7 million in April 2019.

Back in 2015, Griffith listed her Aspen Mountain villa for $9.9 million. She purchased the luxurious 12 acres house in 2002 with her then-husband, Banderas for $3.55 million. However, no buyers hitting the estate, she sold the Aspen retreat for $4 million in March 2019.

An interesting fact about the house is the house consist of a wine cellar that can hold 9,000 bottles.

Back in 2014, Banderas paid Melanie $4 million to buy out her share of their New York City estate. He listed the apartment in 2018 for $8 million.

Following their divorce in 2015, Antonio and Melanie sold their long-time Los Angeles home for $16 million to Netflix executive Ted Sarandos. The former couple first bought the house in 1999 for $4.2 million.

To know about your favorite stars, please follow marriedceleb.com.