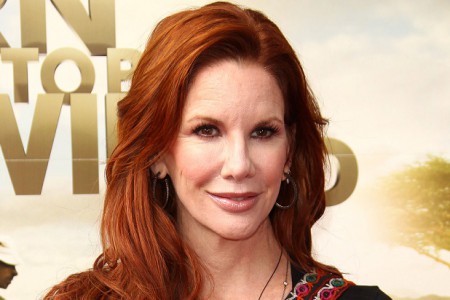 We have seen many child actors who enjoyed a successful career during their early days and on the later job. And today we are going to talk about one particular actress, Melissa Gilbert. The Primetime Emmy Awards and Golden Globe Award-nominated actress, Gilbert is known for her roles as Laura Wilder on the NBC series, 'Little House On the Prairie.'

Who is Melissa Gilbert?

Melissa Gilbert is an American actress and television director who began her career as a child actress in the late 1960s. She appeared and guest-starred on television. During her adult days, she continued her career in television films.

Melissa Ellen Gilbert was born on May 8, 1964, in Los Angeles, California, the U.S. As of 2019, she is 55 years old, and her birth sign is Taurus. She was born to parents Kathy Wood and David Darlington, but they gave her for adoption immediately after her birth. Gilbert was adopted by actor and comedian, Paul Gilbert and his dancer and actress, wife, Barbara Crane.

Besides, she was also a contestant on season fourteen of the dance competition show, Dancing with the Stars on ABC. From 2001 to 2005, she served as the President of the Screen Actors Guild. Additionally, she has written an autobiography called Prairie Tale: A Memoir.

Outside of her acting career, Gilbert ran for U.S Congress as a Democrat in Michigan's 8th congressional district and won the Democratic primary.

Talking about Gilbert's relationship status, she is married and is enjoying her marital status. But, she has been married thrice in her life. She is the mother of two sons and is the stepmother of three children.

After two failed marriages, Gilbert married fellow actor Timothy Busfield. The couple married on April 24, 2013, and moved to New York from Michigan in late 2018. As of 2019, they have been married for over six years.

Now, let's talk about Gilbert's past relationship. She was first married to actor Bo Brinkman. Before Brinkman, she was engaged to actor Rob Lowe but later called off their engagement. Afterward, Melissa and Brinkman married each other on February 22, 1988.

Gilbert and her first spouse welcomed a son named Dakota Paul Brinkman on May 1, 1989. Sadly, the duo separated after four years of marital life in 1992. Gilbert then married actor Bruce Boxleitner on January 1, 1995, in her mother's living room. The couple was engaged twice, and Boxleitner broke up with her each time.

Melissa and Bruce welcomed a son named Michael Garrett Boxleitner on October 6, 1995. Sadly, the couple announced the news of their separation and on August 2011, Gilbert filed for divorce from Boxleitner.

As of 2019, the Little House on the Prairie's child actress, Melissa Gilbert has a net worth of $500,000. The primary source of her income comes through her different roles behind and in front of the camera. Additionally, she runs a few businesses, which help to boost to her earnings.

In 1985, she received a star on the Hollywood Walk of Fame for her contribution in the television industry. Throughout her career, Gilbert has maintained an impressive amount of earnings.

How much is Melissa Gilbert's Salary?

The exact amount of Melissa Gilbert's income and salary is unknown. However, her annual earnings might range from $45,000-$56,000. The average salary for a television actor is over $40,000, and the earnings might go up to nearly a million dollars. Actors like Jim Parsons and Johnny Galecki falls on the list of highest-earning tv actors.

After the announcement of Gilbert's candidacy for U.S Representative from Michigan, an opponent's campaign spokesperson referred to Gilbert as "tax cheat." As per sources, Gilbert owed $360,000 in back federal taxes and $112,000 in California state taxes.

She later stated that the tax was an outgrowth of a stalled acting career, the economy, and divorce. For your information, Dutch businessman Jorrit Faassen was also sentenced for imprisonment for fraud charges.