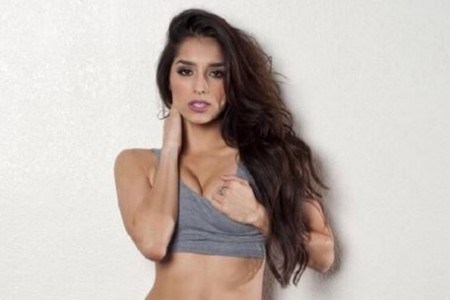 The 32-year-old Melissa Soria is an American model from California who appeared on the cover of the 2010 Playboy's Sexy Girls Next Door. Besides, she also graced the pages of several editions of Playboy magazines in 2010. Melissa belongs to a multiracial background and is Hispanic. She is Spanish, Irish, Native American, Indian, and Persian.

Soria, who was born on November 6, 1987, in California, is 32 years old as of 2019. Upon graduating in Sports Nutrition from college, she worked as a receptionist and bartender. Soria began her modeling career in 2009 by posing for suntan lotion, Hawaiian Tropic.

Is Melissa Soria Dating Anyone?

The hot model is currently not dating anyone at the moment. She is primarily focused on building her modeling career. Further, Melissa's preference for guys is someone who is tall, dark, and handsome. As for the husband, she wants guys with a muscular build and has the qualities of a gentleman.

Melissa, at the age of 32, is an unmarried woman. To date, she has remained silent about her private life matters. The model is incredibly gorgeous and has a drop-dead hot figure. In the past, she might have dated, but now she is a single lady. Therefore, Soria doesn't have a boyfriend.

Although Melissa is not married, some sources have claimed that she is a single mother. She is said to be the mother of a boy named Rayyan, but the name of his father remains a mystery.

How Much Is Melissa Soria's Net Worth?

The exact net worth of the former Playboy model is hard to tell as Melissa hasn't revealed her earnings to the media. However, the average salary for a model is around $46,000 per year. Melissa, who began her career in 2009, worked with Bridal Couture, Gear And Grooves, Estetica, DuJour, Redbook, Hello!, etc.

The income rises along with campaigns such as brand promotions, films, music videos, commercials, and projects. Therefore, analyzing Soria's work to date, she might have a net worth of $500,000 as of 2019. Some of the former playboy models who has a decent net worth are Crystal Harris, Kimberley Conrad, etc.

Soria has managed to collect a decent income from not only her modeling career but also from numerous music videos. She likes to spend her wealth on traveling to exotic places.

The beautiful Melissa is a hot girl next door type of girl, and she has appeared in several music videos portraying a spicy character.

She starred in several music videos for rapper Lil Dicky, including White Dude and Flames. Likewise, she also appeared for the music video Rosana along with rapper Wax.

It is evident that models have to do regular workouts and stay in the best shape to stand out in a professional career. However, Melissa Soria takes her workout regime to the next level. She regularly works out with heavy weights and has an intense exercise routine, which is the secret of her perfect physique.

Melissa, who has a perfect body measurement of 34-24-35 inches, studied Sports Nutrition in college. Therefore, she has risen as one of the hottest models in the American modeling industry.

The above article features some interesting aspects of the model, Melissa Soria, former Playboy magazine cover. To know about more celebrities, follow marriedceleb.