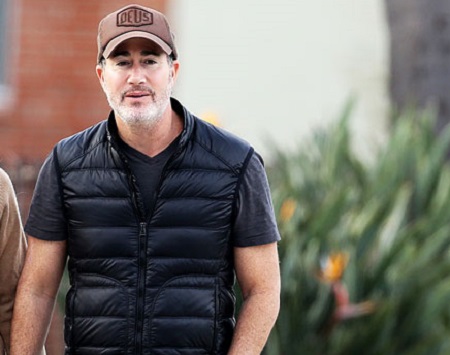 Michael Barrett is an American award-winning cinematographer who is best known for working Shane Black's film Kiss Kiss Bang Bang in 2005 and Seth MacFarlane's film Ted in 2012. However, he gained worldwide popularity after his engagement to popular actress, Anna Faris.

He is a member of the ASC- American Society of Cinematographers since 2015 and Academy of Motion Picture Arts and Sciences since 2016. While Anna is famous for her main role Cindy Campbell in the Scary Movie films (2000–2006).

Yes, it's official finally. Aged 50, Michael has been happily engaged to his fiancee, Anna. They met for the first time on the set of Overboard in 2017. While making their love chemistry on the big screens, the duo also made a strong connection in their real life.

After finishing the shooting of Overboard, the two started dating secretly and remained close on the media about their relationship. Nevertheless, they came out as a real dating couple in September 2017 after dating quietly for several months.

On February 2020, the actress Faris confirmed her engagement to her fiancee, Barrett on James Corden's show "The Late Late Show" Tuesday. She even showed a diamond sparkler on her left ring finger. As of now, the lovebirds are planning their future wedding ceremony.

He is a Divorced Man

Yes before sharing an intimate relationship with Anna, he was once married to his wife, Natasha Sizlo Barrett. However, there is no information about the wedding details. But they share two kids whose name also remains private.

On the other hand, Scary Movie films' star was first married to an actor, Ben Indra, an actor. They first met on the set of 1999 film, Lovers Lane and tied the knot on 3rd June 2004. Their private ceremony was held among their loved ones.

The duo stayed married for an overall of four years. But unfortunately, they separated in April 2007 citing irreconcilable differences and filed for divorce.

Their divorce was finalized on 19th February 2008, where Faris paid $900,000 to Indra in the exchange of some properties and acting royalties.

His Fiancee, Faris is a Mother Of One

Yes, the 1.65 m tall actress Anna shares six years old son Jack Pratt with her second husband, Chris Pratt. After first meeting on the set of Take Me Home Tonight in 2007, they announced their engagement in late 2008.

After a year, they walked down the aisle on July 9, 2009, Bali, Indonesia in a beautiful wedding ceremony. In 2012, Jack was welcomed nine weeks premature. All the things between them were going smoothly but after some turn of issues.

But unfortunately, they announced their separation on August 7th, 2017, after being married for eight years. That same year, their divorce was finalized and took half-half custody of their son, Jake.

Net Worth and Earnings In 2020

Starting initially working with the 1947 film La Perla, Michael, the 175 cm tall has successfully accumulated a considerable amount of fortune. As of now, his actual net worth is not mentioned anywhere but it is assumed to be more $500 thousand.

His cinematography's 2015 Ted 2, which was directed and written by Seth MacFarlane, Alec Sulkin and Wellesley Wild. The film received mixed reviews from critics grossing over $216 million against the budget of $68 million. Apart, he has worked in TV series such as Close to Home, CSI: Miami, and CSI: Crime Scene Investigation.

On the other hand, his fiancee, Anna has a net worth of $30 million. Further, she earned the payroll $125,000 from CBS sitcom Mom for early seasons but her salary was bumped to $200,000 in the third or fourth season.

He was born on 28 May 1970 in Riverside, California, the United States as Michael Bradley Barrett. Born to the American parents, he holds American citizenship and is British French ethnicity.

For his education, Barrett holds a Bachelor degree from the University of California in Los Angeles in art history in 1996. Later, he studied at Columbia University where he completes his M.F.A in film in 1996.