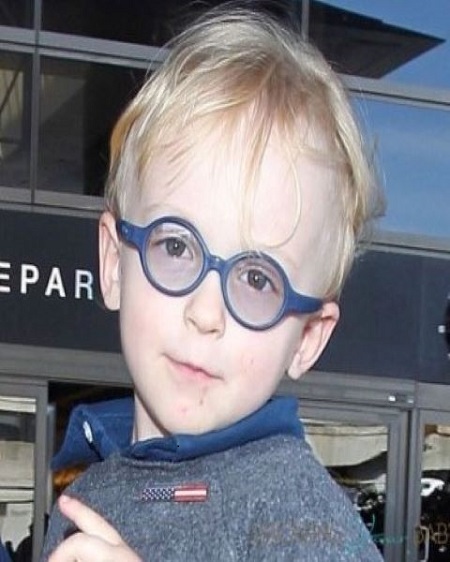 Jack Pratt is an American celebrity kid who has successfully grabbed media attention since his birth. He is famous for being the single son of Hollywood superstar, Chris Pratt and Anna Faris. Chris came to fame after starring as Andy Dwyer in the NBC sitcom Parks and Recreation from 2009 to 2015. Anna is famous for her main role Cindy Campbell in the Scary Movie films (2000–2006).

He was born on 25 August 2012 in the United States. His grandparents are Daniel Clifton Pratt, Kathy Pratt, Jack Faris, and Karen Faris. His aunt is Angie Pratt and uncles are Cully Pratt and Robert Faris. So far, he holds American citizenship and belongs to the white ethnicity.

Chris, 41, and Anna, 43, are no longer a couple. They first met on the set of Take Me Home Tonight in 2007. Pratt's role even proposed to her character in the show.

When Faris left her first husband, Ben, she started dating Chrish immediately. They soon announced their engagement in late 2008. After a year, they walked down the aisle on July 9, 2009, Bali, Indonesia in a beautiful wedding ceremony.

In 2012, Jack was welcomed. Things between them were going smoothly. But unfortunately, they announced their separation on August 7th, 2017, after being married for eight years. That same year, their divorce was finalized.

From the beginning, there are reports that Christopher Michael was unfaithful to Anna, which affects their marital relationship. Chris and Anna have now successfully stayed on good terms after the separation and are trying to remain close to their son.

Just three months after their divorce, The Magnificent Seven's star started love romance with the author, Katherine Schwarzenegger in June 2018. She is the daughter of The Terminator's actor, Arnold Schwarzenegger.

They became engaged on January 13, 2019, after one year of dating. Then they tied the knot on June 8, 2019, in Montecito, California. In April 2020, they announced that they were expecting their first child together. Finally, their baby girl Lyla Maria Pratt has arrived in August 2020.

Mother, Anna is Set To Get Married Again

Yes, the mother of one, Anna is engaged to the filmmaker, Michael Barrett. They first met on the set of film Overboard and made their relationship public in September 2017.

On February 2020, the actress Faris confirmed her engagement to her fiancee, Barrett on James Corden's show "The Late Late Show" Tuesday. She showed a diamond sparkler on her left ring finger. They enjoyed their love relationship for around three years.

Before being intimate with Jack's dad, Pratt, she was once married to her first husband, Ben Indra from 2004–2008.

When it comes to his dad's Chris net worth, it is around $60 million, which he has collected from acting work. As per his salary, he reportedly received $10 million from film Jurassic World: Fallen Kingdom.

He was born nine weeks premature. At the time of his birth, he weighed just 3 pounds and was 12 ounces. So, he had spent a month in the NICU. So, Jack's parents were initially worried about the baby's prognosis.

According to People, Anna wrote in her memoir about the experience, saying: "The pediatric neurosurgeon sat Chris and me down to tell us that Jack had some severe brain bleeding and there was a chance that he could be developmentally disabled.

So, the doctor also said that Pratt, 8, had special needs until he was around 18 months old. Now, he is a healthy boy with only some small vision and leg muscle problems.