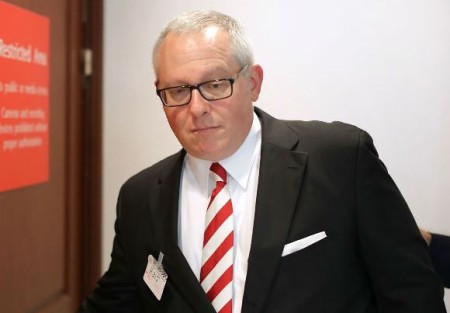 The 58-year-old Michael Caputo is a media consultant and a Republican political strategist. He became the assistant secretary of the Department of Health and Human Services for public affairs in April 2020. He has worked under the former presidents, Ronald Reagan, and George W. Bush. At present, Michael is working under the president, Donald Trump's administration.

Michael Raymon Caputo was born on March 24, 1962, in New York, the United States. His grandparents moved to the U.S as immigrants from Southern Italy. After finishing high school, Caputo worked in Hawaii with the United States Army in public relations. After leaving the Army, he attended the University of Buffalo.

Caputo is happily married to his wife, Maryna Ponomarenko. They first met in Ukraine, while working for a parliamentary campaign in 2007. Despite having a 22-year age gap, the couple began a friendship and had a mutual liking.

Maryna moved to India in 2008 to study yoga at the Yoga Vidya Gurukul Ashram. They got engaged at a resort in Goa. Further, Michael and Maryna's marriage ceremony took place in a tugboat in the middle of the Kerala river in June 2009.

The couple has been married for over 11 years and is living happily without any complications. Maryna once revealed that she insisted her husband to leave the politics after their marriage. Unlike Caputo, another political strategist, Susan Del Percio is unmarried as of now.

The couple shares three daughters, but they make sure their children stay away from the limelight. Two of the three daughters are Ana and Lia Caputo. The family of five resides in New York.

The identity of their third daughter is still a secret. As of now, all three daughters are studying in high school. Maryna is Michael's second wife, as he was previously married to a Russian student in the late 1990s.

Michael has another Daughter

Caputo has another daughter named Miranda Jansing from a previous relationship. As per Miranda, she grew up without never meeting her father until 2011, when she was 27 years old at the time.

When first meeting his daughter, Michael said that he would not allow politics to separate them. However, Miranda said that he abandoned her after the 2016 election. Their relationship had an extreme tension in 2017 when they fought on social media over an opinion about gun violence.

She explained to an online tabloid: “In June of 2017, when the shooter attacked the Republican baseball team, I wrote a post,” she said, “I was disowned because of that. And I have not talked to him since.”

The Republican political strategist Michael Caputo has a net worth of $5 million as of 2020. As an assistant secretary of the Department of Health and Human Services, Caputo earns an annual salary of over $152,000. Throughout his political career, Michael has worked in various positions. Therefore, his incomes and earnings are desirable.

Caputo has worked as assistant director at the House of Representatives Gallery. He has also worked as the director of media services. As a media consultant, Caputo earns around $49,000 per year. Another influential politician, Nigel Farage, also has a similar net worth.

A prolific Twitter user, Caputo erased his racist tweets from before April 12, 2020. In a series of now-deleted tweets, Caputo made racist comments about Chinese people.

He also said that the Democrats wanted the coronavirus to kill millions of people. When asked by CNN, Michael responded by saying that he didn't care at all.