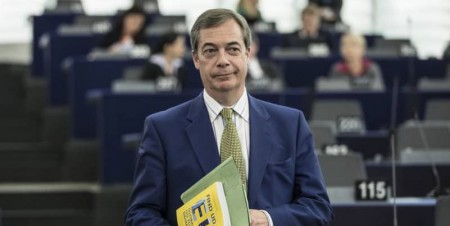 Who is Nigel Farage?

There are only a few of political personalities who are famous for their leadership. And, today we are going to discuss about Nigel Farage, who is the 2016 fifth-most influential member of Parliament. So, who is he exactly? The 55-year-old, Farage is a British politician, broadcaster, and leader of the Brexit Party since 2019.

Nigel has served as the Member of the European Parliament (MEP) for South East England since 1999. His career trajectory is similar to that of a former British politician, Lembit Opik. Apart from his political activities, Farage is a vice-chairman of the pro-Brexit organisation Leave means Leave and is the host of a radio phone-in on the Global-owned talk radio station LBC.

Nigel Paul Farage was born on April 3, 1964, in Farnborough, Kent, England, United Kingdom. His father Guy Justus Oscar Farage was a stockbroker, while his mother, Barbara was a homemaker.

From 1975 to 1982, Farage studied at Dulwich College and after leaving school in 1982, he decided to work in the City of London, trading commodities at the London Metal Exchange. He also worked in a few of investment banks and financial firms like Drexel Burnham Lambert, Refco, and Natixis Metals. He joined the Conservative party in 1978 but later left the party in 1993.

Farage is a former leader of the UK Independence Party (UKIP) and is known as a prominent Eurosceptic in the UK since the early 1990s. He helped found the UKIP having left the Conservative Party in 1992. Further, Nigel first became the leader of UKIP in September 2006. In 2017, he began contributing to the FOX News network and in December 2018, he announced his resignation from UKIP.

In February 2019, Farage confirmed the news of his membership with Brexit Party in the European Parliament. Likewise, in March 2019, Farage was officially announced as the new leader of the Brexit Party.

Besides his political work, Farage also presented a few television shows. Since 2017, he has hosted The Nigel Farage Show on the UK talk radio station LBC. From March 2018 to July 2018, he hosted a podcast under the LBC banner titled, Farage Against The Machine.

Talking about Nigel Farage's personal life, he has been married twice. Further, Farage is a father of four adult children. However, both of his marriage didn't go well. So, is he single currently? How is the personal life of Nigel Farage?

Farage married Irish nurse Grainne Hayes in 1988. How did they meet? On November 25, 1985, Farage was hit by a car after a night out and suffered injury to his head and left leg. And guess who treated him for 11 months. Yes, the woman who treated him became his first wife.

Further, in 1999, Farage married a German bond broker Kirsten Mehr. Farage and Mehr first met in Frankfurt in 1996, while he was traveling on a business trip.

The couple has two daughter named Victoria and Isabelle Farage. His children would be entitled to German citizenship through their mother. Farage employed Kirsten as his parliamentary secretary. She earned around $33,000 from the European Parliament and amassed more than $220,000 since she began working for him.

Sadly, in 2017, Nigel and his second wife, Kirsten separated after eighteen years of marriage. As per sources, Mehr accused Farage of cheating her with his mistress Annabelle Fuller. Fuller is a former press aide to Farage. However, he denied of having an affair with Fuller.

On May 6, 2010, Farage was traveling the morning of the election in an aircraft with a pro-UKIP banner attached. Unfortunately, the plane crashed and he suffered injuries that were said to be non-life threatening.

Although the injuries were said to be minor, his sternum and ribs were broken and his lung was punctured.

On May 12, 2019, Nigel Farage slammed BBC's Andrew Marr during a heated appearance on live television, accusing the presenter of conducting the most "ridiculous" interview ever. Farage could be seen shaking his head angrily as the interview finished.

"This is absolutely ludicrous. I’ve never in my life seen a more ridiculous interview than this. You are not prepared to talk about what is going on in this country today. You’re in denial, the BBC is in denial, the Tory and Labour parties are in denial.”

As of 2019, the current Brexit Party's leader, Nigel Farage has a net worth of over $4 million. Throughout his career as a politician and member of the European Parliament (MEP), Farage has amassed a hefty sum of net worth. For your information, some of the politicians who have similar net worth are Kamala Harris and Bernie Sanders.

Although back in 2017, Farage declared himself as a skint (person with no money), it was later revealed that he used to live in a luxurious house worth over $4 million in Chelsea townhouse.

What is Nigel Farage's Income?

During his tenure as the leader of the UKIP party, Farage earned about $72,000 per year. Also, as per reports, he took over $2.5 million in expenses and allowances in over a ten year period from 1999 to 2009.

Moreover, in May 2019, British broadcaster Channel 4 News reported that Farage received benefits worth as much as $490,000 that were funded by the Arron Banks. Therefore, we can say that Farage has a lavish lifestyle and is one of the highest earning politician.