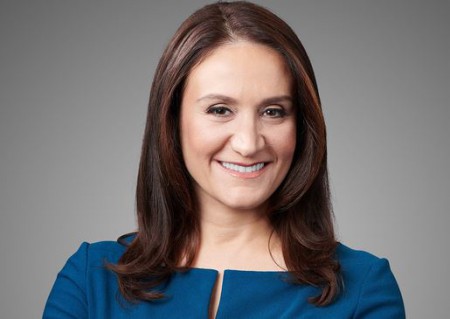 The 2004 Broadcaster of the Year, Michelle Caruso-Cabrera is an American business news reporter who is currently working as a contributor to the CNBC. She spent more than 20 years at CNBC and was the station's chief international correspondent for eight years. She previously co-hosted programs such as 'Power Lunch' and the 'Worldwide Exchange' program.

At the present moment, Michelle is a part-time contributor of CNBC. She left the station to become a member of the Board of Directors of a financial services firm called, 'Beneficient.' Cabrera is also an author of a book called 'You Know I'm Right: More Prosperity, Less Government.'

The 52-year-old Michelle Caruso-Cabrera is probably living a single life, but some sources claim she might be married. The detail information about her personal life is hidden behind the curtains as she has never revealed her husband's picture on any social media accounts. Additionally, Michelle hasn't made any public appearances with her partner, which gives hints that she is not married.

Michelle, however, has mentioned her husband in different interviews and in an interview with Benzinga on December 15, 2017, she shared some things about her husband:

"I enjoy going to the theater with my husband and the opera, and we do a lot of things socially, but nearly every morning and nearly every night, I’m doing something related to work.”

Despite being a popular media personality, Michelle has managed to keep her personal affairs extremely private. There is no information about whether she has children or not.

Michelle was previously married to her ex-husband, Paulo Lima. The couple was married in 1999, but their relationship couldn't last long. From their marriage, the former couple didn't share any children.

After her divorce with Lima, Michelle was rumored to be dating a wall street investment banker in 2008. Also, in 2015, there was another rumor about her engagement. She never spoke about the rumors.

The former longtime employee of CNBC, Michelle Caruso-Cabrera, has a net worth of $1 million as of 2019. She is a business news reporter, and her primary source of income comes from her prolonged journalism career. Julia Boorstin, CNBC's senior media and entertainment correspondent, also have a similar net worth.

Cabrera has over 30 years of experience in print TV, and online where she specializes in news writing, broadcast journalism, broadcast television, and digital media.

The average salary for a business news reporter at CNBC is reported between the range of $95,000-$120,000. Therefore, Michelle might have earned similarly. She is no longer a full-time employee at CNBC but serves as its contributor.

Currently, Cabrera is a member of the Board of Directors of a financial services firm called Beneficient. There is no doubt that she must have a lavish lifestyle.

The above article aims to provide information about the 52-year-old business news reporter Michelle Caruso-Cabrera. To know about your favorite media personality, follow marriedceleb.