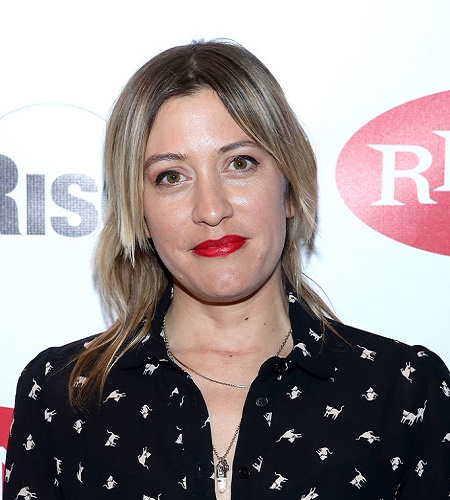 Michelle Kath Sinclair is a Film director and producer who is known for her work on As I AM: The Life and Times of DJ AM (2015) and The Terry Kath Experience (2016). Also, she is known as the life partner of renowned Scottish film and television actor Adam Sinclair.

Michelle Kath Sinclair was born on May 19, 1976, in Los Angeles, California, United States. As per her citizenship, she is American and is of white ethnicity. So far, she is the daughter of a mother, Camelia Kath, and Terry Kath, late musician and songwriter. Moreover, her stepfather is Kiefer Sutherland, an actor.

How Long Been Michelle and Adam are Married?

The beautiful director has been married to her long-term husband, Adam Sinclair, for 16 years. Likewise, they had their first encounter in Hawaii, in 2001 while Adam was filming blockbuster To End All Wars with her stepfather, Kiefer. Her husband Adam also appeared in 24: Live Another Day, with her stepfather.

After first encounters, Kath and Adam, 42, fell in love and soon started dating. Then, after three years of a love affair, they finally tied their wedding knot on May 6, 2004, in the presence of their family and friends. Since then, the married couple are enjoying their marital life without being a part of any sort of conflict or break-ups

The whole family resides near Venice Beach, California, as of now. Another director, Carlo Gabriel Nero, leads a happy married life with a wife, Jennifer Wiltsie.

Yes, you heard the right. This adorable couple, Michelle Kath and Adam, are happy and proud parents of two kids. Soon after marriage, the two welcomed their first baby, Hamish Sinclair, in February 2005.

After a year, the three became four after giving birth to another baby son named Robert Quinn Sinclair in the family. Although the whole family kept her private life behind the curtains, we are sure that they are living a jolly life together.

However, the actor once admitted that his kids hadn't seen much of his work because a lot of what he does is quite. He continued saying: "My oldest boy is just starting to understand what I do for a living, he's at a young age, but I've taught him what fiction is and what isn't".

How Rich is Michelle Kath Sinclair in 2020?

Well, Michelle Kath has long been working in the television industry where she has directed two documentaries to date, including The Terry Kath Experience. So, she will surely receive ranges from $47,701 to $80,519 per annum, which is the typical salary for "documentary filmmaker."

As of now, Kath Sinclair has a net worth of $80,000 over her entire career of directing and producing. More to that, she's also likely to bring in more prospects for her talent in the near future and broaden the horizons of her career.

On the other hand, her husband, Adam Sinclair, is a Scottish actor who has an estimated $2 Million net value as of March 2020. Likewise, he is best known for playing the role of Will O'Brien in the mid-2000's TV series, Mile High, from 2003–2005. Moreover, Adam shared the screen with actress, Lolita Chakrabarti in Holby City in 2005.