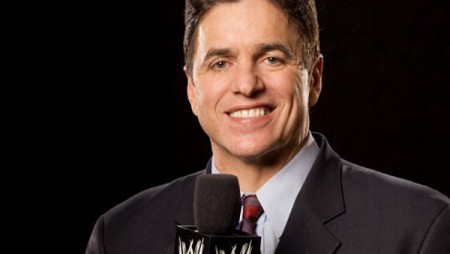 Mike Adamle is a name we must not forget in the world of sports broadcasting. He is a former American football player and sports broadcaster. Adamle is known for his work with WLS-TV, WBBM-TV, and WMAQ-TV. Similarly, he worked for World Wrestling Federation (WWE) as a play-by-play commentator, General Manager, and interviewer. Mike is officially retired as he was diagnosed with dementia in 2017.

Michael David Adamle was born on October 4, 1949, in Euclid, Ohio. He is 70 years old as of 2020. His father, Tony Adamle, played football for Cleveland Browns and later became a physician. Mike graduated from Northwestern University, where he also played college football.

Adamle is married to his loving and supportive wife, Kim Adamle, an educational psychologist. It is said that the couple first met around 1989 when Adamle was a host for American Gladiators. There is not much information about the couple's wedding and early married life. However, they tied their knot in Ohio.

Mike and his wife, Kim, has four children of whom one is adopted as a teenager. They have a son named, Brad, and three daughters, Courtney, Alexandra, and Svetlana (adopted from Ukraine). Likewise, the pair also has three grandchildren.

The Adamle couple resides in Evanston, Illinois. Since Mike has dementia, he rarely makes any public appearances. However, he appears on television shows sharing his story and his health condition.

On February 7, 2017, Mike revealed that he was diagnosed with dementia, a disease that causes a long-term and gradual decrease of the brain's capacity to think and remember. Hence, his national and local broadcasting career was cut short by the presumed effects of chronic traumatic encephalopathy (CTE).

Mike also has epilepsy, and he believes that the past 19 years of epileptic seizures resulted from his concussions in football. On March 24, 2017, he officially retired from WMAQ-TV.

Adamle is currently a member of the Greater Chicago division's board of directors. In 2007, he received a Personal Achievement Award at the Richard N. Rovner Awards Dinner. Like Adamle, another former NBA player, Jerry Sloan announced that he was diagnosed with dementia in 2016.

As Adamle's brain is slowing eroding, it is difficult for him to perform the daily task. Meanwhile, his wife, Kim, takes care of him. Kim helps Mike sort his many daily pills. Mike gets experimental ketamine treatments and does dance therapy and exercises intended to preserve his cognitive skills as much as possible.

Mike battling with dementia and its effects!

Despite having a severe health condition, Mike aware people about the effects of dementia. He wants to inspire people by telling his story. Further, a special documentary about Adamle's battle with his CTE was shown by NBC Sports Chicago's documentary called, The Adamles: Mind Over Matter.

The former football player and sportscaster, Mike Adamle, has a net worth of $1 million of 2020. While he played six years in the National Football League, Adamle used to earn around $124,674 per year. However, Mike never revealed his exact earnings.

After retiring from football, Adamle joined NBC Sports. He spent six years with NBC Sports, earning over $53,212 per year. Mike has also reported for ESPN. In 2008, Adamle began working as an interviewer for WWE. Further, he also became the General Manager for the Raw brand. Unlike Mike, Mark Giangreco, a famous sportscaster, has an impressive net worth.