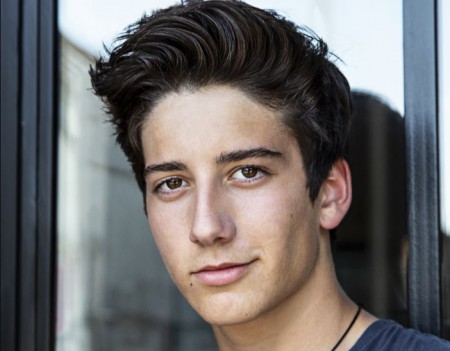 American actor, Milo Manheim is popular for her role as Zed in the musical family romantic movie, Z-O-M-B-I-E-S. He is also known as the 2nd runner up of the 27th season of a reality dance show, Dancing with the Stars, along with his dance partner, Witney Carson. For his performance in the musical, Generation Me, he received a New York Musical Theatre Festival award nomination.

Manheim was born on 6th March 2001, in Venice, California, the United States to Camryn Manheim, an actress, and Jeffrey Brezovar. Born into a Jewish family, he hails from Czech and Polish descent. So, is he dating or single? Find out more in detail about Manheim's personal life on the following.

The 18-year-old actor, Milo seems to be much friendly with his co-actress of Zombies, Meg Donnelly. The duo met time on the set of Zombies in 2018, and since then, they're enjoying their company.

Because of their amazing chemistry, most of their fans are questioning about their love life, are they dating or just friends or not? As of now, the haven't proclaimed in the media, but they're enjoying their company since a long time.

Manheim also posted a photo while kissing Donnelly on the cheek via Instagram on 25th July 2019, which made their fans more curious about their intimate life.

His caption even made the fans speculate regarding their relationship,

''MY BABYYY 19!!! You already know how lucky I am to have you in my life. Everyday I’m so grateful we had to do 5000 chem reads for zombies cuz there is nobody else I could’ve imagined going on this crazy adventure with - shmoo.''

The star not only mentioned her as his baby but also kept a love emoji. Apart, as of 2019, the duo are working together for the upcoming movie, Zombies 2.

Zombies actor, Milo was once in a relationship with an actress, Holiday Kriegel. The former couple first had an encounter on the production of Chicago in 2018.

The duo later began to date from February 2018 while working on the show. Unfortunately, they ended their relationship in October 2018.

It was also rumored that Manheim is dating an American internet celebrity, Alexis Ren. The two were seen in the Coachella Music Festival while holding hands.

But, the rumors turned out to be false after Milo cleared that he's a relationship with Ren is something like a sister and brother's bond.

The Dancing with the Stars runner-up, Manheim has a net value of $800 Thousand as of 2019. He earns decent bucks from his profession. According to Salary, an actor/actress makes $56,502 per year in the United States.

Manheim frequently appears in the role of Peirce on the television comedy show, American House, which garnered 7.3 stars out of 10 from 6,301 ratings. Just like him, some other actors, for example, Carly Hughes also appears on the show.

Milo's beloved mother, Camryn Manheim, further maintains a whopping fortune of $12 Million. She made the amount from her career as an actress.

Manheim's mom besides bought a house in Los Angeles, California, which costs $2.3 Million. The house consists of five bedrooms, four, and a half bathroom on 2,468 square feet.

American actor, Manheim started his career from the theater where he portrayed in various musical plays, including A Chorus Line, Spring Awakening, Footloose, and many others. He made his debut appearance as Riley in the supernatural TV show, Ghost Whisperer, in 2009.

Check out How Milo Manheim Plays The DCOM Lyric

Milo additionally acted in a television documentary series, Teens Wanna Know in 2017. He also appeared in a TV special program, Disney Parks Magical Christmas Celebration, in 2017. Similarly, his other television works are The Talk, Home & Family, Celebrity Family Feud, and so on.

Take a look at Married Celeb, Where You Can Read You Favorite Biographies & Articles!!!