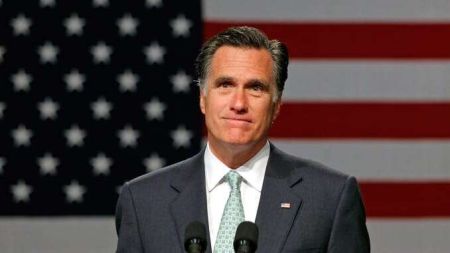 Mitt Romney was born as Willard Mitt Romney on March 12, 1947, in Detroit, Michigan. He is among the four children born to George Wilcken Romney and his wife, Lenore LaFount.  Mitt's father served as the Governor of Michigan from 1963 till 1969. His mother was also a nominee for the U.S. Senate in 1970.

Mitt Romney is a Married Man. He tied his knot with Ann Romney on March 21, 1969. The couple performed two wedding ceremonies.

The first one was held in a civil ceremony in Bloomfield Hills and the second one on the next day at Utah in a Mormon wedding ceremony at the Salt Lake Temple.

This relationship sets a perfect example for the lovers. As they recently celebrated their Golden Jubilee of their marriage. From the fifty years-long marriage, Mitt has welcomed five children.

Mitt was attending Brigham Young University during his marriage with his childhood school mate, Ann. Mitt welcomed his first son, Taggart, the following of their marriage in 1970. The couple was living in the basement of the University.

Within, following few years, the love birds became the parents of Matthew. Mitt graduated in 1975 from the University, and the same year, and he had a new member in the family, Joshua.

In the upcoming years, 1978, Ann gave birth to Benjamin, and in 1981, their youngest son, Craig, was born. As of now, Mitt and Ann are the grandparents.

Net Worth and Salary of Mitt Romney

Mitt Romney has a net worth of more than $250 Million. He has accumulated most of his net worth to his successful career in business and serving in the U.S. Government. Romney began his business career as a consultant with the Boston-based Bain & Company.

He worked with the company for more than twenty-five years and recently left as the board member of the company. As per the reports, The company had a market value of more than $4 Billion, when Mitt left the company.

While serving as the Governor of Massachusetts, he declined to take a salary of $130,000 annually. As per the reports published in 2018, his net worth estimated from $190 Million to $250 Million.

Mitt's wife, Ann Romney, has a net worth of $50 Million which is similar to Bill Gates, Daughter, Phoebe Adele Gates. In 2012, Ann donated a huge sum of $11 Million to a charity. She earned much of her net worth with her involvement in the business of her father and husband.

As of now, Mitt, along with his wife and children, are living in a $9 Million Mansion located in the Park City of Utah. Also, he owns a $12 Million Beachfront Mansion in California. There is another Villa in Boston, Massachusetts spread over 11-acre.