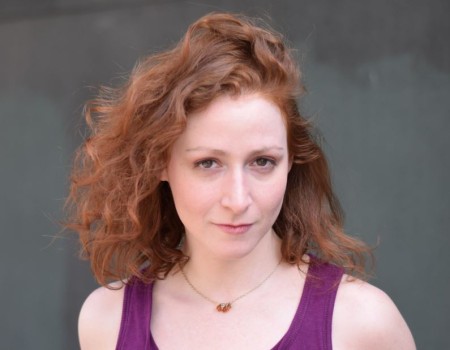 Mollie Israel is an American actress, who came to prominence after playing the role of a little girl in the comedy movie, Look Who's Talking. She is also a member of a rock band, The Lost Patrol, with whom she recorded her first song, Creepy Cool. She frequently appears on the sports comedy-drama series, Red Oaks as Bar Patron.

Mollie was born as Mollie Sara Israel on 3rd September 1985, in Los Angeles, California, United States. She further holds an American nationality and hails from Jewish descent. Apart from this, she is engaged now.

Mollie Israel is dating an American animator, Jason Dincauze for many years. The couple is engaged since December 2013 but isn't officiated as husband and wife as of now.

The pair are also the parents of a beautiful child, Harper Heckerling Dincauze (born on 17th August 2014), and she is now five years old. Mollie is fond of sharing her daughter's photos via Facebook.

Mollie posted a photo of Harper, where she captioned with the birthday wishes to her two years child on 17th August 2016. She recently shared a picture on Facebook where Harper was playing with her grandmother, Amy, on 12th May 2019.

Mollie's parents, Neal Israel and Amy Heckerling, enjoyed the most moments of their lives together in a happy relationship. They tied the knot in a small, private ceremony in the presence of their families and friends on 22nd July 1984.

The duo had their first encounter on the set of Johnny Dangerously, where Neal acted under the direction of Amy in 1984. Shortly they started dating and became engaged after the completion of the movie.

The married pair also worked on the romantic comedy film, Look Who's Talking Too in 1990. Upon making the film, they divorced in 1990, citing irreconcilable differences after staying married for six years.

Talking about Mollie's mother, Amy first dated her close friend and fellow director, Martin Brest. They first met in Los Angeles during the 1970s. After dating for many years, they separated but remained good friends.

Heckerling was then married to her first husband, David Brandt on 7th November 1981. Three years later, they divorced in 1983 but didn't share any children from their nuptials.

Upon their divorce, Amy started dating with Ghostbuster director, Harold Ramis during the mid-1980s. Furthermore, it was reported that Harold is the biological father of Mollie Israel, even though Amy and Neal were married, which was revealed in Anne Ramis' daughter, Violet Ramis' book, Ghostbuster's Daughter. More to that, she was linked into a four-year relationship with actor Bronson Pinchot.

On the other hand, Neal's first wife, Lori Lieberman is a singer-songwriter whom he married on 9th January 1979. Unfortunately, they divorced on 3rd October 1980 but didn't share kids from their marriage.

Neal is currently living a happy marital life with his third wife, Lillian Johann Kastenberg. The two walked down the wedding aisle on 17th November 1999. Nevertheless, they haven't welcomed children as of now.

Mollie Israel's net worth is $300 Thousand as of 2019. Similarly, she makes an impressive salary from her profession. According to Pay Scale, an American actor/actress receives an average payment of $54,000. So, she is probably receiving sufficient wages for her works.

YouTube: Check out the trailer of Look Who's Talking