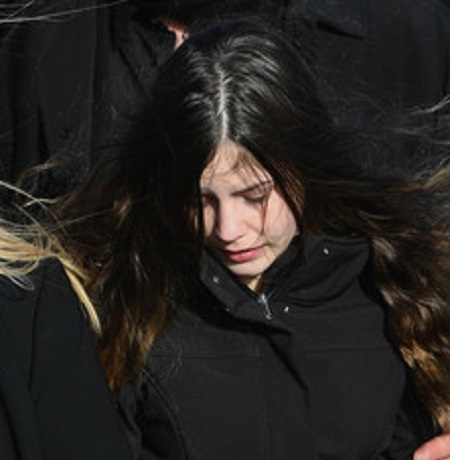 Molly Leigh Burton is known as the daughter of Irish late musician, Dolores O'Riordan and her husband, Don Burton. Dolores was famously known for being the lead vocalist and lyricist for the alternative Irish rock band The Cranberries.

It was formed in 1989 by Niall Quinn, Noel Hogan, Mike Hogan, and Fergal Lawler. Later, Niall was replaced by Dolores. In the article let's find out more about Molly and her family background.

How Many Siblings Does Molly Have?

Altogether, Leigh Burton has three siblings, with whom she shares close relations. They are two biological siblings, one brother, one sister, and one-half brother.  All of them are growing up so fastly.

Taylor Baxter Burton, who was born on November 23, 1997, is her older brother. He's already three years older than her. Dakota Rain Burton, born on Apr 10, 2005, is her younger sister.

Not just them, but she has a half older brother named Donny Jr. Burton, from her dad's previous relationship. They are believed to stay with their father in Toronto following the collapse of their marriage in 2014.

Despite being a celebrity daughter, Molly Burton, 19, mostly keeps her details regarding her personal life under the sleeves. So her love life also remains tight-lipped making her fans curious to known about her relationship.

However, this gorgeous lady hasn't announced that she is in a relationship with anyone. Therefore, we can't suppose without evidence that she has a boyfriend. At the moment, the teenager girl is focusing on her career and is spending her time with her family.

Canadian-born music executive Don and songwriter, Dolores were in a marital relationship for over 20 years. They first met while their bands' Cranberries and Duran Duran toured together in the early '90s.

The lovebirds finally exchanged the wedding vows on 18 July 1994 in a private ceremony. The big day took place at Holy Cross Abbey in County Tipperary. Afterwards, they welcomed three children Taylor (b. 1997), Molly (b. 2001), and Dakota (b. 2005).

"I have the greatest husband in the world in Don and we have the most amazing kids", the singer once said. The entire family moved to their home in Buckhorn, Canada in 2009. But the couple spilt in September 2014 after 20 years of togetherness.

Following their separation, The Voice of Ireland judge O'Riordan suffered from depression and her emotional issues were caused by alcohol use. So she went away from Canada and moved to New York.

The heartbreaking news of Dolores' death saddened her fans and family members. Tragically, at 9:16 am, she passed away on January 15, 2018. She was found unconscious in the bathroom of her room at the Park Lane Hilton hotel in London. She was forty-six.

BBC reports, she was overcome by drowning due to alcohol intoxication, a Westminster Coroner's Court inquiry conducted on 6 September. But two days after her death, the newspaper Santa Monica Observer, alleged to have died of a fentanyl overdose was a fake story.

Her funeral opened on 21 January 2018 and lasted three days of grieving in Ireland at St Joseph's Church from 20 to 22 January. On 23 January, the lead singer of the Irish band The Cranberries was buried at Caherelly Cemetery in Herbertstown.

Molly Burton has not started her own profession at the moment. However, she is living a lavish lifestyle. Additional, after her mother's death in 2018, Bad Wolves Donate $250,000 to her kids Taylor, Molly and Dakota.

Dolores Mary Eileen earned $5 million per year from her musical career. Apart, she bought six luxury cars such as Bentley. Just like her mother, Belly's dad Don is a music executive who worked for the English new wave band, Duran Duran.

Molly Leigh Burton was born on January 27, 2001, in Ireland. She is the granddaughter of Eileen O'Riordan and Terence O'Riordan. Her uncles are P.J. O’Riordan, Brendan O'Riordan, and Joseph O'Riordan.