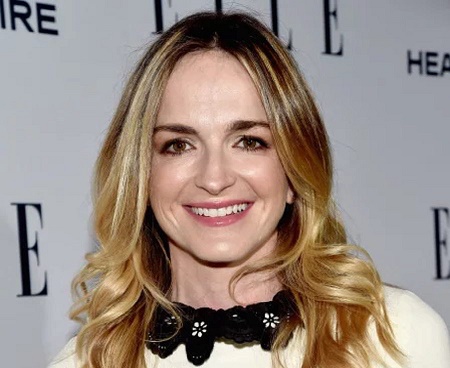 Molly McNearney is an American author and producer who is best known as the second wife of American television host, and comedian, Jimmy Kimmel. Today, she works as the co-head writer of the ABC late-night talk show, 'Jimmy Kimmel Live!' alongside her husband, Jimmy. Her other credits are Dumplin' (2018) and Murder Mystery (2019).

Molly O'Brien McNearney on 13 March 1978 in St Louis, Missouri, the United States to the parents Michael and Michelle McNearney. Further, she has two siblings named Michael McNearney, Jr. (born 1976), and Kelly McNearney (born 1981). So far, she holds American citizenship whereas her ethnicity is white.

When Molly and Jimmy Tied The Knot?

The long term couple, McNearney, 42, and Kimmel, 52, has been happily married for seven years. The two first met on the show of Jimmy when Molly started working as a writer's assistant. But it was not love at first sight exactly.

At their first introduction, the TV host reportedly insulted her. But slowly, the co-workers started working together more regularly and suddenly fell in love. In October 2009, they started dating.

After nearly 3 years of love romance, the pair became engaged in August 2012. And following their 10-month-long engagement, they exchanged the wedding vows on July 13, 2013, at an Ojai Valley Inn. Since the day, they lead a happy marital life without any problems and signs of divorce.

From their marriage, McNearney and her husband Kimmel are blessed with two children. Their firstborn daughter Jane Kimmel was born on July 10, 2014. On April 21, 2017, they welcomed their son or youngest child, William John ''Billy'' Kimmel.

But, the infant William was diagnosed with a genetic congenital heart defect, called Fallot tetralogy (TOF) since his birth. So, he underwent three open-heart operations at age 3.

Before marrying Molly, the writer of Windy City Heat was in a marital relationship with Gina Kimmel, now 55 years. She works as a costume designer.

But sadly after more than 13 years of union, the duo filed for divorce citing irreconcilable differences in Superior Court in the year 2003. After the division, the two still share joint custody of their two kids.

Similarly, the late-night talk show host Jimmy also dated a Sarah Silverman who is a stand-up comedian. They were in a romantic relationship from 2001 until they split in March 2009.

What is Molly McNearney's Total Net Worth?

Working as a head writer on a show, Jimmy Kimmel Live!, McNearney earns a heavy amount of fortune. She has a net worth of $20 Million as of June 2020. She has accumulated that fortune throughout her career as a  writer, producer, and actress.

Meanwhile, her husband, Jimmy Kimmel is now considered the world's 17th richest television host. As of early 2020, he shares a net worth of $50 million throughout his hosting and comedian works. As for his salary, he makes around $15 million per year as the host of Jimmy Kimmel Live.

Apart from Hermosa, the couple has a $7.1 million two-parcel property above the famous Chateau Marmont in the Hollywood Hills.