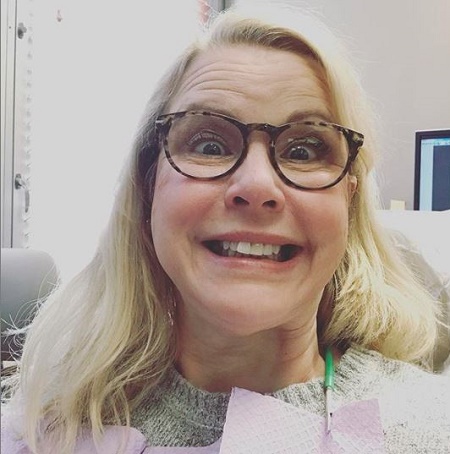 A Costume designer, Gina Kimmel gained fame when she got married to Oscars and talk show host, Jimmy Kimmel. Her credits include The Man Show (1999), Party Like the Queen of France (2012), and Party Like the Rich and Famous (2012). Today, she runs a vintage lingerie company called Maddy James.

Gina Maddy was born on December 13, 1964, in the United States. She holds American citizenship and is of white ethnicity. As per her education, she attended Northern Illinois University from 1983 to 1985 and Arizona State University from 1985–1988.

But despite having lived a relatively long time, they ended their marriage in 2003 after been together for almost 14 years. The couple filed for divorce in 2003 citing irreconcilable differences in Superior Court. Even after the spilt, they still share their two children's joint custody.

Live After The Divorce

Since the division, Gina seems to be living a single life. But her ex-husband, Jimmy is now happily married to a writer on his show. She is none other than, Molly McNearne, who is a screenwriter.

The two first met on Jimmy's when Molly, 42, started working as a writer's assistant. But it was not exactly love at first sight. But the co-workers gradually began to work together more frequently, and unexpectedly fell in love. They started dating in October 2009.

The couple became engaged in August 2012, following nearly 3 years of love romance. And they exchanged the wedding vows at an Ojai Valley Inn on July 13, 2013, following their 10-month engagement.

McNearney and her husband Kimmel are blessed with two children from their marriage. On 10 July 2014, their first-born daughter Jane Kimmel. Their son or youngest child, William John "Billy" Kimmel was born on 21 April 2017.

Net Worth and Earnings of Gina Kimmel

As a costume designer and wardrobe supervisor, Gina Kimmel might have earned a decent amount of money. Meanwhile, no sites have disclosed her actual net worth, but it's valued to be $500,00. She is also receiving an extra amount today from her own company as Maddy James

On the other hand, her ex-husband, Jimmy Kimmel is considered the world's 17th richest television host as of today. He shares an impressive net value of $50 million throughout his hosting and comedian works. As for his salary, he makes reportdely $15 million per year as the host of Jimmy Kimmel Live.