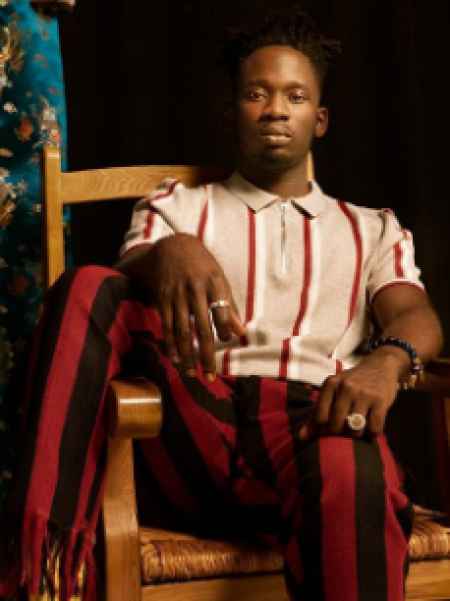 Who is Mr Eazi?

Oluwatosin Ajibade also known as Mr Eazi is a Nigerian entrepreneur, singer, and lyricist. He was into music since his college days. He also worked in a production house prior to releasing his own album.

Mr Eazi was born on July 19, 1991, in Port Harcourt, River State, Nigeria. His father is a pilot whereas his mother owned a business.

He went to a primary school in Lagos for early education where he actively participated in the school's choir. Moreover, he moved to Ghana at the age of 16 to pursue a career in mechanical engineering at the Kwame Nkrumah University of Science and Technology.

Meanwhile, Eazi started recording music in his college days, he recorded the track 'My Life' that gained popularity on the campus eve. He also established a promotion company called Swagger Entertainment where he promoted shows and events in the campus premises.

Eazi left Ghana to move back to Nigeria at the age of 23. He ran an e-commerce platform. In 2013, Mr Eazi released his debut album 'About to Blow", He then started gaining fan and followers after his debut single "Skin Tight" for which he got international recognition.

In 2016 Ghana Music Awards, Nigerian musician Wizkid signed Mr Eazi to his label record company Starboy Entertainment. His album "Life is Eazi" sold over 200,000 copies worldwide within a matter of a week.

Currently, he blends up Nigerian music, he is the pioneer for Banku music which is characterized by prelocating rhythm inducing Ghanaian Pidgin English delivered with a laid-back vocal. His genre is categorized as Afrobeats convenient to West African pop blending hip hop and global pop.

Mr Eazi has been nominated with several awards. He was awarded as the Best New Artist, Viewers Choice, Listeners Choice and the Song of the Year at the MVP Awards.

What is Mr Eazi's relationship status? Is he married?

Mr Eazi is in a relationship with Temi Otedola who is a Nigerian designer and the daughter of billionaire Femi Otedola. He has not yet stated about any of his past relationships and affairs.

Temi and Eazi were together for a long time. Temi is very supportive towards him, in fact, she went to the USA and joined him at the 2019 Coachella music festival in California where Mr Eazi performing.

For now, their romantic relationship is running smoothly. They seem blessed to be in bonding with each other. Until now, no rumors, news, and any kind of controversies have hit the surface regarding their love life.

How Much is Mr Eazi's Net Worth?

As of 2019, Mr Eazi has a total asset of over $1.5 million. Most of his income sources are through his concerts and performance. He is making a good amount of fortune through his career in the music industry.

Additionally, his father's aviation company fetches a good earning making them one of the richest families of Nigeria.

With such a tremendous amount of wealth, he is living a rich and affluent life. He spends quite a cash in traveling and maintaining his manner of living.

Mr Eazi is widely popular in social media. His lifestyle can be known through his media profile. He has followers over 2.4 million on his official Instagram account.

Mr Eazi is an adventure freak who travels to some of the most thrilling places. He is seen uploading photos of his shows and concerts in his social media account.